Barking: Is Your Barking Dog Creating Your Own Reality TV Program? 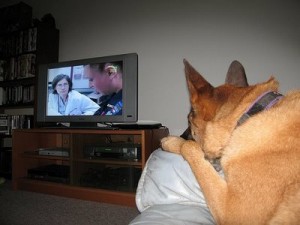 A recent client called about their dog’s nuisance barking at dogs and other animals on television.

A favorite channel in their home was animal planet and that was at the top of the list for Charlie, their hound dog/retriever mix, Charlie has an unmistakable hound dog howl-bark that has greatly increased his owner’s anxiety and stress levels – not to mention making it nearly impossible to watch favorite programs like Victoria Stillwell’s “It’s Me or The Dog.”

Did I mention that she has a wall mounted 53” flat screen TV with surround sound (big woofer speaker included) all designed to bring life-like/sound-like quality right into your living room? This provided some pretty stiff competition for good old Charlie!

If you’ve experienced the same frustration and have now decided to produce your own reality TV program or “doggie intervention,” what’s a compatible solution for this nerve-grating problem that works for both you and your dog?

Simply create a new association and doggie response with the television program for your dog. Here’s how to do this:

Your goal is to have your dog look at you instead of barking every time a dog comes into view. The last step is to wean him off food treats to a point that you are just occasionally treating him to keep the association strong.

Be as comfortable with trainer of your dog as you are with the teacher of your children. And remember, “Opportunity Barks!”

Dog Training: My Other…

When helping folks with dog training for…

As you think back over Thanksgiving and…