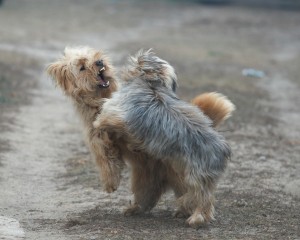 Let’s examine why dogs fight in the first place.  Sometimes I don’t believe people think about some important considerations when they get that second, third or fourth dog.

Competition for resources, including your attention, status-related conflicts – that would be housemates of the same sex fighting over social status,  an initial poor introduction to each other,  one dog having established territory and resenting the other as an intruder, redirected aggression -the dogs really want to go after the mailman or the dog next door, but are prevented from doing so
and therefore turn on each other in frustration.  Remember, dogs are pursuing aggression, not because they are not “nice”, but because aggression is:

Working for them to get them something they think they need i.e. access to resources (food, space, articles of play and attention from you), status etc.

Working to keep someone or something away they desperately want kept away i.e. a housemate who would otherwise strike first.

Simply a result of the dogs’ chemical arousal level being very high and their having learned to get release by turning on their housemates.

So, what are the solutions to dogs fighting?  Here are some to try, but before any of these exercises are attempted, be sure that all dogs have a solid foundation in their basic
obedience: stay, sit, down,  come and off.  Make it clear to the dogs that they will both be generously rewarded for displaying socially compatible behavior.  Ok, here’s the list to address dog fighting:

Sharing your attention-or anyone else’s attention – Put both dogs in a sit near you.  Pet one, then feed that one.  Then feed the other dog for tolerating your interactions with the first dog.

Remaining non-reactive with each other  Put one dog in a sit or down stay.  Pet the other dog and make a fuss over him.  Reward the first dog for tolerance and remaining in place.  Then reverse the exercise.

Train regularly on sits and downs with both dogs, again never putting them facing each other (a conflict position).  Release the dogs and allow them to interact, praising them for good behavior.

These procedures for addressing dogs fighting, give the dogs structure, explains your expectations of them in each other’s presence, while at the same time manufacturing a pleasant experience around each other.

If you are having issues, try my suggestions.  The first rule is ” always control the situation/environment“, that is, dogs on leashes and or muzzles (if required).  All dogs and people should be safe in any training exercise.

One size fits all dog training does not competently address issues like this.

Be as comfortable with the trainer of your dog as you are the teacher of your children.  And remember:  “Opportunity Barks!”

School is back in session. Now is…

In light of the recent bite incident…

19 Responses to Dog Training: why do family dogs fight