Petiquette With Jim Burwell: Aggressive Dog Behavior – How To Turn It Around 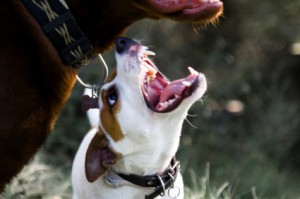 Aggressive dog behavior happens. Many dog owners who would never have thought their dog would become aggressive are startled, confused and sometimes afraid when their dog acts aggressive towards them.

There are close to 20 types of dog aggression that have been identified, but all can have potentially serious consequences. If left unchecked, it can lead to biting and worse.

If your dog seems to be in conflict with you over who controls the environment, he is probably suffering from dominance aggression. He may seem to think that he controls everything, from the inside of the home to the backyard and is willing to do battle over it.

These types of dogs seem to have little to no tolerance for people (including you) who they believe are invading their space. You try to pet the dog and he may turn and snap at you. Many dogs learn social and other acceptable behaviors when they are young. They must know that you are the one who is the leader, not them. They must know that the things that are important to them are all controlled by you. Aggressive dogs don’t see it this way. They lack the knowledge and tools needed to resolve dealing with people, including you.

Starting behavioral training and most importantly leadership role with your dog when they are puppies is the ideal and critical time to do this. When they are young, puppies are easily desensitized to being petted and you can correct nipping and biting problems by redirecting them to perform another commands such as sit. Once a dog is older, dealing with territorial aggression is a more difficult process – because you have learned behavior to turn around.

If you did not begin training and practicing leadership role with your puppy when he was young and you now have an issue with a dominant dog – don’t give up. The most important thing you have to understand is that dogs are very simple creatures – we complicate them. There are simple things to do to show your dog in a truly positive, non harmful or aggressive way that you are the leader and everything is on your terms—-not his.

You must immediately begin to set boundaries and restrictions with your dog – again in a positive way. Dogs are very similar to children, they do well when they know who the boss is, what the rules are, what the expectations are and how to they meet those expectations.

Have a leader is intrinsic in a dog’s sense of well being. If you do not provide that leadership, your dog, whether genetically predisposed to be a good leader or not—-will ascend up the ladder to be the leader if you aren’t. The problem arises in that the way a dog behaves as a leader does not work in our human culture.

So lack of leadership with your dog is setting him up to fail if he has a dominant personality.

Be as comfortable with the trainer of your dog as you are the teacher of your children. And remember, Opportunity Barks!

Folks are baffled when I suggest to…

The Best Gift You Can …

A new fancy bed?  A couple of…

2 Responses to Petiquette With Jim Burwell: Aggressive Dog Behavior – How To Turn It Around