Petiquette With Jim Burwell: The Solution to Problem Behavior Could Be As Easy As the Words You Choose 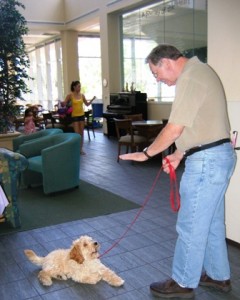 Dog behavior problems are a concern for many dog owners and a major reason that dogs end up in shelters.

The best thing you can do for your dog is to begin training when he is still in the puppy stage. It’s is much easier to start off on the right foot than to go back and correct months or even years of learned behavior by your dog.

No matter when you start your training, being consistent is the major key to successful dog training. Training a dog is very much like raising a child. When children understand what behavior is expected, that expectation never changes and that expectation of behavior is conveyed the same way time after time, children are clear on what to do and will generally do the correct behavior time after time. The same holds true for dogs.

Here is an example: If you begin teaching your dog the meaning of the command of OFF then that command can be used later should your dog begin to jump on you. Do not say DOWN

Where most people make the mistake is using the same word such as DOWN to mean not only get off the couch, or quit jumping on me and to also mean to lay down. Pick one word for a behavior and stick to it.

The word DOWN should be used only when you are asking the dog to lay down.

The word OFF means stop what you are doing, no matter what it is, look at me while I give you an alternate behavior to do that is acceptable. The word OFF is one of the best control commands you can teach your dog.

When you are clear with the message to your dog, your dog has an easier time complying. Also remember to be patient when you are training and keep your lessons short – about 6 minutes in length but you can do training several times a day.

Why People Should Trai…

Are you loving your do…

Over Half the Nation’s Pets are Now…

5 Steps To Getting You…

Chewing is a natural dog behavior. Anyone…