The Truth About Positive Reinforcement Training 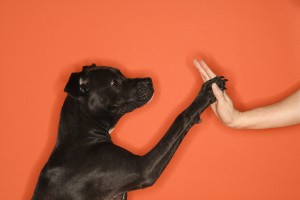 We love our dogs, and we want to do right by them.  Other authors of articles on training have noted how it is difficult to wade through all the sources and information available on television, the Internet, and in books to find the “right” information.  This is so very true!  There is so much good information about dog behavior and training nowadays.

Two decades ago, the research on canine behavior was scarce.  Now there are many groups of researchers evaluating a variety of aspects of canine behavior.  But the dog training world also is still filled with sources and professionals using ideas and methods based on antiquated information and folklore rather than science.

Many of these sources espouse information that is inhumane, illogical and often downright dangerous to dogs and their people. We have enough science on dog behavior and the principles of learning that dog training should not be based on “what my daddy did” or some method arising from misinterpreted wolf behavior.  Dogs are not wolves.  They don’t act like wolves – and frankly we don’t want them to.  Centuries ago human illnesses were treated with bloodletting.  Back then doctors thought that worked. We know better now.  I’d be appalled if I went to the doctor for a cough and my doctor decided to drain a pint of my blood as the treatment.

Medicine has advanced – and so has animal training. In the dog world, the phrase “positive reinforcement” is a bit of a buzzword now.  Everyone likes it, most people use it, yet many people don’t actually understand what it means.  So let’s talk about some truths and dispel some myths and misconceptions about positive reinforcement.

In the strict sense, emotions don’t play a role in the definition of PR.  However, it is mostly true that things that reinforce behavior are things that the animal likes or loves.  If you have ever given your dog a treat for sitting or coming to you when you called, you have used positive reinforcement. The push for positive reinforcement training came out of the marine mammal world. So then you might say, “well, dogs aren’t whales – they are different!” That is true; dogs are not whales and we don’t train dogs in pools, but we also don’t put whales on leashes.

What is important to know is that the basic principles or laws of learning apply across all species – from tarantulas to dogs to horses to humans.  Even a lowly amoeba can be trained to do a number of things.  This fact is not in dispute; it has been proven with decades of research on all manner of species.  A trainer that truly understands the principles of learning can teach ANY animal something.

Here is one of my favorite misconceptions regarding positive reinforcement:  dogs trained with positive reinforcement have no discipline or structure.  This is so far from the truth, it is absurd.  A lack of structure or discipline has nothing to do with the method being used to train the animal.  People that use a “balanced” or downright punitive approach to training don’t necessarily impose more discipline or structure than a good positive reinforcement trainer.  Bad training is just bad training – period. A good trainer imposes strict criteria for what behaviors he/she reinforces in the animal.  I give my dog tons of affection, treats, and praise throughout the day.  (Isn’t this why we have dogs?) But these are not delivered willy-nilly – every reinforcer serves a purpose to strengthen a behavior that I like.  I don’t pay attention to my dog if she’s barking.  But I will go pet and kiss her if she is resting quietly on the couch watching the squirrels in the back yard or chewing on her bone.  This is positive reinforcement.  The more time she spends resting quietly or playing with her toys, the less time she spends barking at things – and I can accomplish this without yelling at her, yanking on her collar, or pinning her down on the ground.

One reason for this misconception about lack of discipline is that PR trainers often instruct owners to ignore, neutrally interrupt or redirect unwanted behavior.  Which intervention you choose is based on the situation and the behavior being shown.  If your dog is barking at you for attention and you yell at the dog, you just gave the dog what it wanted – attention. You have actually rewarded (reinforced) barking. Don’t be surprised if the dog keeps barking at you in the future. Good trainers know that when you draw attention to a behavior, you stand a realistic risk of actually reinforcing that behavior in some way – even if it’s a behavior you don’t like.

Research over the past several years has shown that dogs trained with such punishment are more likely to misbehave and more likely to show aggression toward their owners.2-4 These interventions are unnecessary, detrimental, and dangerous. Another related myth:  a balanced training program is the best.  Well, “balance” – in the sense of some of both sides – isn’t always desirable.  I don’t want “balanced” health – some health and some disease.  When it comes to health, we want as much health as possible and little to no disease.  Similarly, when it comes to training and learning, we want to emphasize positive reinforcement and use as few aversive interventions as possible.  This is the recipe for the best psychological health for our pets and ourselves.  This is not conjecture or opinion – it is fact.5

While many people don’t truly understand positive reinforcement, just as few truly understand punishment.  Many dog trainers profess that they don’t punish dogs.  Instead they use terms such as discipline or correction – but these are just euphemisms for punishment.   Often punishments or corrections are so poorly implemented, even by allegedly experienced trainers, that they constitute abuse.  Dogs have been seriously injured and even killed by dog trainers all over the nation – unfortunately these cases are not rare. There is no state or national standard for dog trainers.  It is truly “buyer beware”.  This is your dog’s emotional and physical health, so do your research when looking for a trainer or a training source.  Find sources and individuals that are professional and use documented science based techniques.  Don’t let your dog trainer “blood let” your dog.

Living with Your Dog –…

Has living with your dog become intolerable?…

5 Responses to The Truth About Positive Reinforcement Training