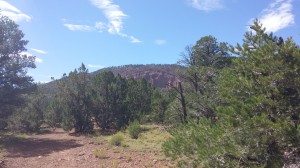 I just celebrated my seventh birthday. Wow! I don’t feel any different than when I was a little pup, although I am taller and stronger. I still have lots of energy and love all kinds of adventures. Woof! To celebrate this most awesome occasion, my folks took me to Red Mountain in Flagstaff for a hike. I’m always up for a hike!

From Flagstaff, we took Highway 180 north toward the Grand Canyon (ooooh, I can’t wait to see it, especially with snow, but that is another day!) and drove about 30 miles. Just before mile point 247, we turned left and followed the signs to Red Mountain. From the road, we could already see it in the distance. 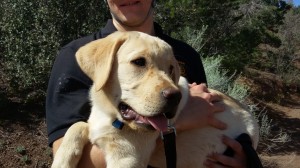 Red Mountain is a really unique geological specimen. It is a cinder cone resulting from volcanic activity some 700,000 plus years ago. I’m not good with numbers, but that seems like a very long time ago! Anyway, we had a sunny day, and I was ready to go. We met several of my kind on the trail, which starts off in a Pinion-Juniper grove. I love the smell of pine trees. They remind me of my home in Colorado. I was sure to sniff them all!

As we hiked on the red dirt, the trees started to change and got bigger. My mom said they were Ponderosa Pine. I don’t really know the difference, but they were pretty. The 3.1 in and out trail is relatively flat, so any dog of any age would enjoy the trek. The only tough spot is the ladder. Just about 1.2 miles in, we had to climb up a ladder to get to the cinder cone. My dad had to carry me up. Right at the ladder were a bunch of bees buzzing around in the bushes. I HATE bees. One stung me right on the top of my nose once, and I looked like an Italian Mafia Dog for days! I digress—we ran through the bushes to get out of there and arrived at a big open area. As we looked up, we saw Red Mountain. It is quite impressive! 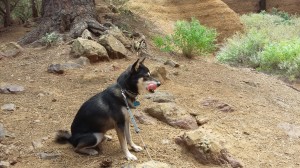 We were sitting on a log admiring the view when a gal named Julie and her dog, Jasper, told us about another woman who was hurt up in the rocks. Apparently, she was trying to climb them, which I would not recommend! She was trapped with her dog, Chauncey. My dad was on the search and rescue team in Seattle long before my time. He had equipment and necessary supplies to go investigate. My mom and I stayed put. I don’t like my pack being separated, so I panted as any good dog would. Jasper was smaller than me and able to bolt up the rock with his mom. Between Julie and my dad, they were able to get Michelle down from the rock, despite her broken ankle. 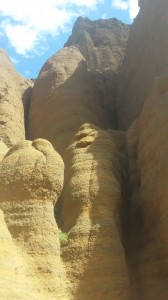 We sent word for help, and they were on the way. We gave both the human and dog water and food. Poor Chauncey was just a pup, and he was really scared. His paws were hurting something fierce, and I know what that is like. I befriended him and tried to help him calm down. Man, he was gonna sleep good tonight! This was the kind of adventure we all could do without. We were able to make our way about half way down the trail when we saw the rescue workers. These humans swooped Chauncey up and had a special cart for the lady. All was well! Chauncey would be sleeping in a safe car soon, and his mom would be given appropriate care.

This birthday adventure certainly turned into a memorable one. I’m just glad we were able to help and that everyone would be OK. Always come prepared with proper gear because you just never know. Be safe out there! 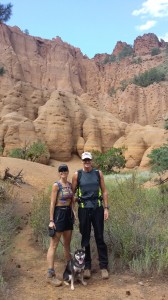 Kumaito (Kuma for short) is a multi-tan Shiba Inu, an ancient breed from Japan, who moved from the Rocky Mountains of Colorado to Friendswood, Texas. He enjoys running almost every day with his mom, chasing squirrels out of his yard, playing with toys, pestering his brother Edmond, eating, napping … well, Kuma loves about everything and everyone! His mom, Lorraine Bossé-Smith, is kind enough to help him tell his story. She is a certified professional behavior analyst (CPBA) who has appeared on numerous radio and TV programs across the country. She is a motivational speaker, corporate trainer, business consultant, executive coach, behavioral-wellness expert, and author of eight published books who helps companies rewire their business for success and inspires people toward a healthier, more balanced life. You can reach Kuma through Lorraine’s website: www.lorrainebosse-smith.com. Be sure to visit Kuma Dog’s Facebook page at www.facebook.com/Kumathedog
You never know what he’ll be up to next!

A seminar by The Lady Horse Whisperer…