Changing behavior is all about verbs, actions.  We can observe behavior in real space and time because it is physical and often includes movement.  We describe behavior with verbs.  He sits.  She runs.  They eat.  Remembering that helps us steer away from the labels we put on dogs, like dominant, dumb and stubborn.  Those are adjectives, and the only real way to change them is to stop using them.  Actions, on the other hand, we can change.

I didn’t invent the science of behavior change (I wish I had).  In fact, there isn’t a dog trainer in Houston or anywhere else for that matter who can make such a claim.  The truth is, the core concepts of animal training (including the human animal) are more than a century old.   And they are among the most tested and verified bits of knowledge in the field of psychology.  That’s a good thing really.  We dog trainers don’t have to reinvent the process.  Be careful of those who claim to.  I wrote about the science of dog training in the March 2011 issue of Houston PetTalk.  While we are always refining the way we apply the science of behavior change in dogs, the fundamentals remain the same.

Ah science.  There seems to be a collective yawn when the topic comes up.  Maybe our concept of science reminds us of boring afternoons in the classroom.  That’s not what I’m talking about here.  Using behavior science in dog training is cool, very cool.  In fact, every trick you have ever taught your dog is an example of applied behavior science.  Dolphin shows are excellent examples of it.  Behavior science is actually happening all around us.  Dog trainers use it all the time in some form or other, even if they don’t fully understand it. 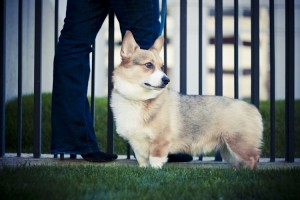 Here’s how it breaks down.  A behavior is repeated (and becomes habit) when there’s a history of favorable consequences following the action.  How about an example?  Put on a sweater – enjoy warmth and avoid being cold.  Nice!  Here’s a doggie example.  Knock over the garbage can – enjoy snacking on the spilled food scraps.  The actions of putting on a sweater and raiding garbage cans will increase over time because of the consequences.

Changes in the environment set these learned behaviors into action. Let’s look at the human example again.  The temperature drops when the sun goes down – put on a sweater – avoid the cold.  The temperature drop didn’t cause the action of putting on a sweater, but it did set the stage.  Perhaps the sight of a garbage can and the absence of people set the stage for the action of knocking the can over.  In both examples, it’s the consequence which keeps these actions going time and time again.

You’re on your way to understanding how to change behavior (your dogs’ actions).  Cues from the environment (we are part of our dogs’ environment, by the way) and consequences in the environment influence our dogs’ actions.  That’s very good news for those of us who live with dogs.  Why?  Because we can change their environment.  We can remove garbage cans as a potential trigger of destructive behavior.  We can also provide food-delivery toys like Kongs and Bob-a-Lots for better behavior when the dog is left alone.  Now we have the tools we need to change behavior.  We actually had them all along.

Think of anything your dog does that you’d like to change.  Remember to use verbs.  Then think of what happens right before the action, and right after.  Those are the trigger and the consequence.  Can you change either of those, or maybe both of them?   When a visitor comes to the house (trigger), and your dog jumps on her (action), does she pet him (consequence)?  How many of those environmental pieces can you influence?  Better yet, could you teach your dog that when the visitor comes (trigger), he sits politely (action), and she gives him a snack and some petting (consequence)?  I bet you could.

The best part is we’re focusing on our dog’s actions and things in the world around him we can control.  We’re not worried at all about labels.  Those are adjectives and they are not of use in changing behavior.  We’re all about verbs (like sit, and come, and look at me).  And we’re not just looking at our dog’s actions either.  The best way to change an animal’s behavior is to make a few little changes to the environment, and this often means changing our own behavior.

There are basically 5 reasons why dog…

2 Responses to Changing Your Dog’s Behavior