Posted on April 19, 2011 By JBurwell PETIQUETTE WITH JIM BURWELL 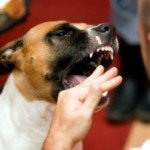 Biting your owner is never okay and and given the circumstances of most rescue dogs, you would think that they would appreciate a roof overhead, food a plenty in the pantry and all the water you would need on tap at the kitchen sink.  But that’s how we humans see it.

A recent email gave me a brief understanding of this particular owner-dog relationship. Following is what I received:

1. We got our dog from an elderly woman who took ill and could no longer care for her Male, 5 year old Jack Russell mix.
2. Before coming to us he stayed with the woman’s daughter until he bit her small child.
3.  He spent some time with our vet before finally coming to live with us.
4. Joey seems to be my dog while tolerating my wife.
5. To the crux of the problem: Joey growls and bares his teeth at my wife when she tries to remove him from the bed each morning but then wants to sit in her lap as she works her puzzles each day.
6. Most recently Joey bit my wife on the nose and drew blood  as she leaned over to pet him.
7. Less concerning, Joey constantly barks at squirrels and  people and dogs passing by in the front. The daily episodes with the mailman are a disaster.

We are devastated with his behavior and are hoping for a workable solution.

Here’s what we did:

The out-of-control barking was easily managed by putting Joey on a leash in the house which gave them better control when his barking episodes erupted.

Oddly, Joey seemed to freeze up when the leash was put on him in the house when the owners were there to supervise Joey’s activities. When they dropped the leash it acted like an anchor. This phenomenon actually stopped his running back and forth barking – probably partially because he was distracted with his ball-and-chain situation. This helped them with their timing on redirecting his attention to quiet sits.

As the couple began to incorporate Joey’s new learn-to-earn program of “come, sit and down” with each owner he began to care less about the goings-on outside in front as he focused more on his new treat-training routine.  This reward-based program was a big hit and also a win/win for both dog and humans.

The leash on Joey also allowed the wife to keep Joey off her lap for one full week. After that she began to allow him up on the ottoman only for brief periods only after he came to her and performed his sit and down.  She would then say, “Up!” and he got his time up on the ottoman – not in her lap.

With the earn-to-learn program requiring him to earn everything: food, access to priviledged space, attention and access to the outside for walks, Joey has a new-found respect for his owners and there have been no more episodes of biting.

Hundreds of thousands of dogs have been…

Giving Thanks to our S…

It is important to remember to…