Posted on June 6, 2013 By JBurwell PETIQUETTE WITH JIM BURWELL

There is no doubt dog exercise is critical to your dog’s mental and physical well being. In fact, lack of exercise is one of the biggest causes of dog behavior problems.

And if you live in a Sunbelt region as I do, summertime brings some very hot and humid temperatures that don’t foster a lot of extended outside exercise with your dog.

Many dog owners are limiting the number of walks and the length of walks because of the heat. 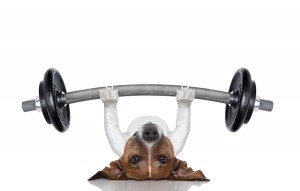 With so many puppies and young dogs needing a constructive outlet for their energy, the question of dog exercise surfaces once again. I’ve been asked numerous times lately to share some of my acceptable alternatives for exercising your dog indoors.

I’d like to share with you my list of alternative exercise plans that you can do that will exercise your dog, strengthen your bond with your dog, create some physical as well as mental fatigue.

Remember, like anything else only consistency and repetition work.

Interactive games with your dog

Tug of war and fetch come to mind. Both of these interactive games can burn a ton of predatory energy but you must play the games correctly and all games must have rules – especially tug of war. We’ll start with that game first.

You should be okay with tug of war and by that I mean – know that your dog will not get aggressive when playing. It’s not for every dog and certainly only adults should play this game with the family dog.

Having said that, here are the rules:

So the sequence is: Sit, Take it, (game on) then Sit, Drop it, toy is put away until the next time. Be consistent with the rules, play as long as you want but make sure your dog’s excitement doesn’t escalate to aggression. Tug of war is not for all dogs. Know your dog.

The game of fetch has been played as long as dogs have been companions but rules are rules. Rules can keep your dog on his game. The command sequence is much the same as with tug and it can be played indoors assuming there is room to run a bit: Sit, Fetch, Drop it/Give and sit again for the next retrieve.

To make the game a little more interesting, you could add a stay to the sit then release your dog to fetch the ball after it stops rolling.

Another variation of fetch with stairs would be to sit/stay your dog at the bottom of the stairs while you toss the ball down the stairs so that your dog fetches and returns the ball to you at the top of the stairs. He’ll be winded after a few times of this! His running direction is always up – not down.

Easy motion tricks to teach are: spin right in a circle then spin left in a circle. Give it a try along with other tricks like roll over, shake or high-5, take a bow, back up and the list goes on. Trick training usually requires the basics so make sure you brush up on the basic obedience commands. Your dog can’t roll over unless he knows how to do a down on command.

Hunting for food is what your dog’s ancestor’s used to do but maybe your dog has turned into a clock watcher and knows exactly when dinner will be served up. Start giving him half his meal in his bowl and the other half is divided into small Dixie cups hidden around the house for your dog to find. If he’s an over-achiever, let him find his entire evening meal (and maybe those weekend meals too) by searching with his nose.

Speaking of food, go on-line with Google and search for doggie food dispensing toys. These toys provide a great way for your dog to exercise himself and his brain figuring out how to get food out of the different shaped toys. The difficulty of some toys can be increased with simple built in adjustments keeping him working at it longer.

Go onto You Tube and search “101 things to do with a cardboard box” (with your dog).
This is really cool. You need to be a little clicker savvy. Your dog will love trying to figure out how you want him to interact with the box in order to get the click which produces the food treat. It’s a thinking dog’s game.

No matter whether you pick and choose some of these ideas or eventually do them all, there is something for everyone and their dog. Keep your training fun and positive!

So, tell me below in the comments. What you think? Did you think the fix would be this easy and fun?

Lots of puppy owners have the incorrect…

Find out how and when to start…