House Breaking: Before You Boot Your Dog to the Curb

Posted on April 10, 2013 By JBurwell PETIQUETTE WITH JIM BURWELL

She was flat out ticked off with the 6 year, love-hate relationship she’s had with her dog Rocky, a little mix.  This was all because of his house breaking problem.

House breaking was literally driving her nuts.  Her frustration came through loud and clear in the message waiting for us Monday morning.

“I’m gonna kick this dog out of the house if someone doesn’t get the dog house broken! I’m at my wits end!”

When Leila returned the call on Monday she got an ear full of the “hate part” of the relationship. Cuss words were flying out of Leila’s headset.

Leila patiently waited for lady to cool down.  It finally happened 5-7 minutes into the one-sided conversation.  The dog owner finally said, I’m so sorry, you must think I’m a bad parent but I had to tell someone!”

This call, which is about a very common problem, reminds me once again of one of the 5 reasons dog training fails for owners. 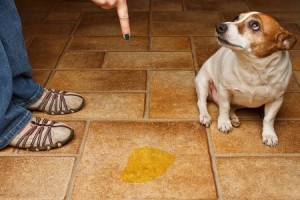 In this case the reason was: The dog’s behavior has not yet produced enough pain, embarrassment, frustration or stress to motivate the dog owner to fix it.”

Obviously for Rocky’s Mom, the pain and frustration had finally caused her to push the panic button Monday morning.

I’m sure she wished it was the “Easy Button” you see on television commercials these days! If it was, it probably would have been pushed long ago. I find everyone wants an easy button fix these days.

Fix my dog problem today. Yesterday would be better! Rocky’s Mom was probably hoping we would say, “Sure, we’ll take him, fix it, then bring back your new Rocky.

This is where I talk about not addressing the symptom but finding the root cause of a dog problem, like with Rocky’s issue. His Mom doted on him so much he couldn’t stand it when she left.

It was worse when she returned and found his “mistakes.”

99% of what was going on between Rocky and his Mom was emotional. He began to feel emotionally insecure. It also caused him to become frustrated and anxious.

In order to relieve the tension caused by the frustration, Rocky began eliminating in the house.

When you change, your dog will change

The owner was insisting something was wrong with Rocky and that we needed to fix his house soiling problem.  Leila asked her if she had thought about any other solutions to which she replied, “Yes. If this problem doesn’t get fixed, I’ll have to get rid of the dog. He’s ruining all the carpets.

We told her that unless her feelings towards Rocky changed and she made a decision to keep Rocky unconditionally, no progress would be made on any re-training program.

She was asked to think about it and give us a call back the next day. She called back and said she had a long talk with Rocky. She started them on the program with a renewed commitment.

I have experienced that when a dog owner sincerely changes their attitude about their dog, say from Rocky’s rejection to unconditional acceptance, owners can begin to see immediate improvement to their dog behavior problems.

Included in this unconditional acceptance of their dog is also a 100% commitment to working a program specifically outlined to fix their dog behavior problem, no matter what it is. Also included was some basic obedience training and regular walks for exercise.

A week into Rocky’s program, his Mom reported no accidents. She had been diligent in working the program which included breaking the cycle of wrongful elimination by crating or gating Rocky when he could not be watched. She rewarded appropriate elimination and caught mistakes before they happened.  It was hard-but-needed work.

Her 100% compliance with the program and new outlook on her relationship with Rocky helped her turn the corner. It was then she realized that when she changed, Rocky changed.

I’m always curious about your input – it’s important to me.  Do you deal with this stinky situation in your house?
We’re always learning and there’s a bunch of you out there we are grateful to be able to serve and learn from.  I’m really interested in your thoughts and opinions on this.  I’m here to help.

Together, We Can Raise a Happy and Obedient Dog”

Even Though it is Halloween season – don’t…

Jim, My daughter visited over the winter…

Dogs – Instead of Chil…

people opting for dogs instead of children.…

2 Responses to House Breaking: Before You Boot Your Dog to the Curb