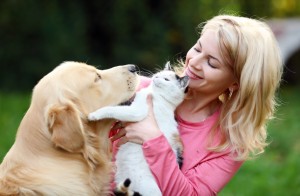 What’s Love Got To Do With It?  (as featured in Houston PetTalk Jan/Feb 2011)

For Citizens For Animal Protection (CAP), everything. Since 1972, hundreds of thousands of animals have received the loving care of devoted staff and an army of volunteers.  It was volunteers who banded together to found Citizens for Animal Protection. Their goal:  defend the helpless, speak for those who cannot speak for themselves. They won the battle against inhumane conditions at the original City Pound and continued fighting “in the trenches” against cruelty to animals.

From rescuing animals with their own cars, caring for them in their own homes, and using mobile adoption facilities at shopping centers, CAP has grown to become a major force in animal care and adoption, humane education and the prevention of animal cruelty.

Nationally, CAP is respected for its high standards and visionary programs.  Locally, CAP is known as the shelter with a big heart.  At CAP, there are no strangers- two or four-legged- when they come knocking at the door 360 days a year.

For 29 years, CAP has worked miracles in limited, leased space.  After years of dreaming, planning, CAP has a permanent home.  It’s well thought out design incorporates the expertise and experience of CAP’s dedicated staff and the creative talents of Dan Boggio and his team at PBK Architects.

CAP’s new Jane Cizik Center has a separate entrance for cats and one for dogs.  Not only will two wings expedite admissions, they create a comfortable, less stressful environment for animals like Sable whose family left her tied up in the yard when they moved out of town.  A sad but often heard story these days as families lose their homes.  (photo of Sable)

In designing the “Dog Villas,” CAP kept in mind two very large and lovable great danes.  A good Samaritan had rescued them in the middle of morning traffic.  A daring feat for a woman dressed in designer suit and heels on her way to a meeting.  As she was being turned away from a shelter, she was told to bring them to CAP where they were welcomed with open arms.  Some very creative rearranging made a temporary space for them until volunteers with Great Dane Rescue of Houston came for them.  CAP’s new home has twelve large indoor runs and five outdoor exercise areas for large dogs to spread out and be themselves.

Missy and Rusty, two mid size dogs, were part of the inspiration for seven “Real Life” rooms. These two canine buddies were the adored companions of homeless men living in a shelter.  Their sad story begins with Rusty being hit by a car.  The men pooled their meager resources to take Rusty to a veterinarian who saved him, but not his badly mangled leg.  When the men’s shelter lost its lease, only CAP supported their heartfelt wish to keep Missy & Rusty together.  There’s no place like a permanent home, but until CAP finds loving families for each of its residents, these rooms, some spacious enough for two or three dogs, will be their temporary ones.  (side by side photo of them)

Years of caring for thousands of scared, hungry, and abandoned puppies, like Smokey and Bandit, were the inspiration for CAP’s “Puppy Palace.”   These two siblings were found shivering, desperately trying to keep each other warm as they took shelter from a heavy rain.  They and many others like them will find comfort at CAP.  They’ll be dry, well loved and fed and have their own place to play and yelp to their hearts content.  (photo of two puppies)

Little kitties like Sunshine, Midnight and Windy will also have their own place to cuddle.  These three came to CAP because their Mom wasn’t spayed.  Apartment rules stated no more than one pet per unit.  It was a sad day when their human companion brought them in.  But, she knew they would be in loving hands at CAP.  The shelter’s new “Kitty Cabaret” will help keep the fear of abandonment at bay as they play during the day and feel safe and warm at night. (photo of three kittens)

Older cats, like Jackie, come to CAP when a family member has passed away and there is no one to take in the surviving pet.   They arrive sad and disoriented.  These faithful felines will enjoy a neighborhood of condos in the new “Cats in the Cityscape” designed to restore their independent natures.  (photo of adult cat)

And, CAP has not forgotten about its other animal friends – rabbits, guinea pigs, gerbils and hamsters whose noses will all twitch with delight as they see their homey habitats.

Prospective and current pet guardians will love CAP’s new Education Center and Children’s Library.  Seminars, pet training, a resource library and even a catering kitchen for birthday parties will keep it buzzing seven days a week.

Thanks to the generosity of Diane and Jim Mattly, CAP has its own Pet Kingdom Park.  Benches and shade trees will make this heavenly area the ideal place to interact with prospective new family members.  Diane was also the fearless leader of CAP’s capital campaign.  Her devotion to animals and tenacious spirit inspired all.

CAP’s dream of a permanent home is coming true thanks to the generosity of so many individuals.   From a fifth grade class that raised $500 to buy a brick to individual donors who looked into their hearts and their savings to make gifts, CAP is eternally grateful and honored to have their love and respect.   Our work doesn’t stop with opening our new doors.  We need your help to continue the good fight.

CAP invites each of you reading this article to visit the shelter and our four-legged friends.  We hope you can’t resist them.  Remember every animal deserves a loving home.  Please browse our website at www.cap4pets.org , where you can find adoptable animals to add to your family and for all the ways you can help CAP continue to help animals in need.

“Until one has loved an animal, a part of one’s soul remains unawakened.”

Skip the card, Say it in the…