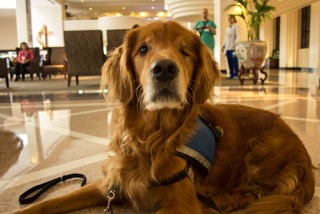 On May 18, 2015 the world celebrated the inaugural National Pet Therapy Day. Therapy dogs provide people with an opportunity for therapeutic contact with an animal who has a friendly and patient temperament, and interacts with children, adults, and other animals in positive ways.

Mayor Annise Parker and David W. Robinson, Houston City Council At-Large Position 2 will proclaim, Angel, a three-Legged, One Eyed, Golden Retriever Therapy Dog as Houston’s Official Therapy Dog at an event on July 21, 2015 at 1pm at Houston City Hall on the second floor. Angel will be honored to represent all of the Houston Therapy Pets as Official Therapy Dog of Houston.
Angel is owned and trained by Trish Herrera, founder of Golden Retriever Rescue of Houston www.grrh.org and who is now a member of Golden Beginnings Golden Retriever Rescue of Houston www.gbgrr.org  and supporter of GRASS a sanctuary for aging Golden Retrievers.  www.grass-tx.org
Angel is an active member of the Faithful Paws Pet Therapy, a pet therapy organization founded by Connie Richards, 18 years ago at the Bellaire Methodist Church. www.faithfulpawshouston.com
Connie Richards, herself received a Greater Houston Service Award this year for her work with Faithful Paws. 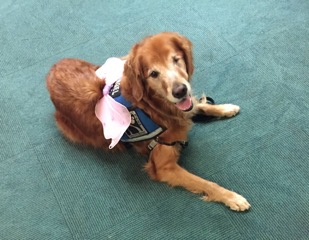 Angel was bred in Porter, Texas by Barbara Shapley, a champion Golden Retriever breeder who refused to euthanize the three-legged, one-eyed puppy and found a home with Trish Herrera through rescue.
Angel was born an only puppy, a rare occurrence amidst Golden Retrievers and has been an active therapy dog with Faithful Paws since July of 2012. She is 6 and half years old.
Angel has 5 titles,
Find Angel on Facebook
www.facebook.com/AngelOfficialTherapyDogHouston?pnref=story
Angel is a reminder to fight for the ones who are different, the ones who are weaker, the ones who look like throwaways, because they may just surprise you.

Curious about how to make the most…

When I first saw this horse…