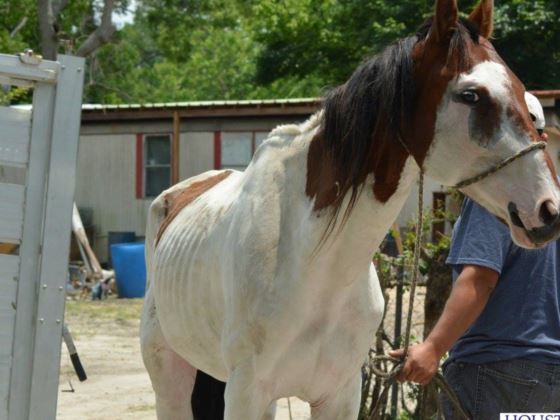 When I first saw this horse I’m calling Freedom (he has no name but Freedom is what I want him to have so I think that’s a good name for him!), I knew I wanted to help him. He was seized by a local shelter in an abuse and neglect case. The shelter staff said it was some of the most deplorable conditions they have ever seen. He was seized along with some other animals, including a puppy that had mange so severely it’s hard to look at the photo. The owner had not even been home for days so the animals were malnourished, starving, in need of medical attention for skin issues and host of other problems.  No animal deserves a life like that and thankfully, this group of animals was saved by the shelter. Freedom is living at the shelter and slowly gaining some weight but he needs a forever home and I have found a plan for him but it will take some financial help. The shelter is doing what they can but they can only give him the basics. I have found a local trainer who is known for her gentle approach who is willing to take him for 6 months and help him recover both physically and emotionally. That gives me 6 months to find him a forever home which I know I can do once many of his issues are resolved. He needs to be gelded, his feet are very much in need of a farrier and the longer they remain untouched, the bigger the risk of issues or damage occurring; he needs chiropractic care, a feeding program to address his past malnourishment plus much more. I have spent time with him at the shelter and he is really sweet but I also feel his sadness. I told him I have a plan and together, with my friends and fellow animal stewards, we are going to give him a better life. Any amount you can give will be another step toward his new beginning of Freedom!

Please click here to donate if you can on his youcaring.com funding campaign and share with others. Any amount would be greatly appreciated!