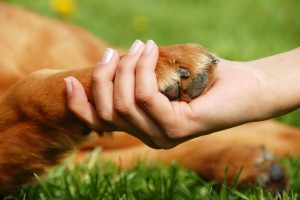 Meet The Dogs
Written by Karla Goolsby, originally published August 2014.
The Tudor-style façade of Houston Hospice sits in stark contrast to the rest of the Texas Medical Center. Behind ivy covered walls, French doors and mullioned windows overlook moss-covered paths and a sparkling pond that reflects low hanging branches of century old oaks. In this tranquil place it’s not unusual to see dogs trotting through hallways or sprawled, cooling their bellies on the smooth floor. These contented therapy dogs feel at home, and without trying they share a sense of normalcy; of being at peace in this place.I shadowed our pet therapy volunteers recently, beginning with Chris Chisholm and her rescued Cavalier King Charles Spaniel, Jazz, and Judy Anderson and her Bichon Frise, Casey. They told me that their very first visit brought them to the room of a five-year-old little girl. Life was ebbing away and she was unresponsive. Chris asked the child’s mother if she could place Jazz on the girl’s bed. The mother agreed, and Jazz, who never licks, began licking the girl’s hand. The girl moved her hand. Then Jazz began licking the little girl’s face. The child opened her eyes and her mother asked, “Do you like the dog honey?” The little girl responded, saying, she liked the dog. Because Jazz instinctively knew what to do, the mother had a few more moments with her little girl before she died that night. This event showed Chris and Judy that visiting hospice was what they and their dogs were meant to do.Next I trailed Loretta Uzick and her Yorkshire Terriers, Cricket and Skyler. Loretta’s most memorable visit happened with her first therapy Yorkie, GiGi. They came to the room of a patient whose family spilled into the hallway and filled the family room. The patient was a woman who had been unresponsive for days. Her sister asked Loretta to bring GiGi in. When Loretta placed GiGi on the bed, the patient awakened and began speaking. Excited family members poured in to speak to her.

Finally, I joined Cassie Chiaro and her Yorkshire Terrier, Vala, and Brenda Chan and her Gold Retriever mix, Andie. They said the most moving moment for them occurred when a family asked them to enter the room moments after their loved one had died. The room was filled with family members who stood in reverential silence. Brenda and Cassie couldn’t believe they were asked to enter such a sacred and personal space, sharing the family’s last moments on earth with their loved one.

There is one month left to cast…