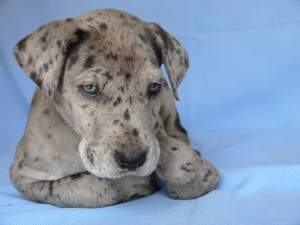 Hip dysplasia is a common problem in growing dogs. Hip dysplasia is defined as abnormal development of the hip joint. Medium and larger breed dogs are most commonly affected.  Hip dysplasia can affect any breed including mix breed dogs, but the condition is particularly common in retrievers, German Shepherds, Rottweilers, setters, St. Bernards, Alaskan Huskies and Newfoundlands. This problem typically begins around 3 months of age and slowly progresses while the dog is maturing.

Hip dysplasia leads to a loose hip. The hip is composed of a ball (femur) and socket (acetabulum) joint. Instability occurs if the socket develops with inadequate depth.  A shallow socket allows the head to partially slide out of the socket, causing damage to the edge of the socket and surface of the ball. The cartilage surfaces of the joint become damaged, leading to progressive, painful arthritis.  The arthritis progresses gradually over the lifetime of the dog. Secondary muscle atrophy occurs due to reluctance to use the limb properly because of the associated pain.

How can you tell if your puppy has sloppy hips? One clinical sign of hip dysplasia is a “bunny-hopping” gait. Normally, the hind legs of a dog will move opposite of one another when running. When the left leg moves forward the right leg moves back. The hind legs of a dog having hip dysplasia typically move in unison, coming forward and moving back together, similar to the way a bunny runs.  Other clinical symptoms include reluctance to jump, difficulty rising, muscle wasting of the hip area, hips that sway excessively when walking or trotting and pain when the hips are extended behind the dog.

Your veterinarian can quickly make a diagnosis of hip dysplasia. It is a good idea to have all medium and large breed puppies screened by your veterinarian at 3-4 months of age.  The condition of the hip is assessed with an orthopedic examination and a radiograph (x-ray).  If a loose hip is diagnosed your puppy may be referred to an orthopedic specialist, such as Gulf Coast Veterinary Specialists, for a second opinion and recommendation.  It is critical that a diagnosis of hip dysplasia be made as early as possibly.  The earlier the condition is discovered, the more options exist for its treatment.

Steps can be taken to save the hip if the condition is caught early before arthritis develops.  A simple and quick procedure called juvenile pelvic symphysiodesis (JPS) may be indicated if hip dysplasia is diagnosed between 3-4 months of age. This minimally invasive surgical procedure is associated with almost no pain and modifies the growth pattern of the hip, leading to a deeper, tighter hip. If hip dysplasia is diagnosed between 5-10 months of age, the puppy may be eligible for a double pelvic osteotomy (DPO).  This surgical procedure shifts the position of the socket, making it deeper and increasing the tightness of the hip.  The DPO is a much-improved technique compared to its predecessor- the triple pelvic osteotomy (TPO).  The advantages of the DPO are less invasive surgery, both hips can be repaired at the same time, the normal width of the pelvic canal can be maintained and increased stability of the pelvis using specially designed locking plates and screws.  Both JPS and DPO are designed to save the normal hip, prevent arthritis and avoid the necessity of a total hip replacement (THR) or femoral head ostectomy (FHO) in the future.

If you suspect your puppy or dog has hip dysplasia, see your veterinarian as soon as possible. The key to success and saving your puppy’s hips is early diagnosis and appropriate treatment!

There is one month left to cast…

One Response to July Sneak-Peek: With Puppy Hips, Tighter Is Better