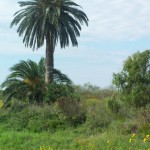 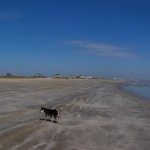 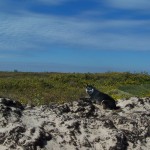 I still miss the cold, fluffy snow of Colorado, but I must say I do enjoy having easy access to the beach. We live in a great place! My family and I took the Galveston Ferry recently to Crystal Beach, which is also known as Patton. The beach stretches seven miles along State Highway 87 in the middle of Bolivar Peninsula.

The ferry ride is free, but you will want to allow plenty of time. We waited about an hour to get on board. Apparently, locals who live on the island have priority. Depending upon the day and the amount of people, they run one to three ferries at a time. Dogs are allowed but must remain in the vehicle. That was fine with me. The floating, moving barge thing kinda freaked me out a little. I was happy to stay in my safe, warm kennel. My humans went up on top for the views.

The ride over isn’t too long, and before we knew it, we were on an island. Peak tourist season ended on Labor Day, so we basically had the entire beach to ourselves. Woooowho! One gentleman was fishing with his eyes closed. Wow, he must really be good! Another lady was riding a bicycle in the sand. Interesting.

As for me and my family, we took a nice, long stroll. Unlike Sunny Beach, another one of my favorites, Crystal Beach has shiny sand. It is like little crystals glimmer in the sun, thus the name I supposed. Very pretty!

Humans can drive their vehicles right on the sand. The beach is wide with awesome dunes for running up and over. The sand called to me, and I had to dig. And dig I did! I was really close to getting to China at one point, I just know it!

After our lovely walk, we sat on the tail gate of the car and ate lunch, listening to the waves. A shrimp fisherman was out casting his nets. I’ve never had shrimp, but I’m game! On the way back, my humans saw a bunch of dolphins swimming and carrying on. Lots of lots of birds followed the ferry, and we all returned safely back to Galveston.

If you haven’t taken the ferry, you must. Crystal Beach is much quieter and more peaceful, offering a nice change from the other beaches. Surfs up dudes!

Kumaito (Kuma for short) is a multi-tan Shiba Inu, an ancient breed from Japan, who moved from the Rocky Mountains of Colorado to Friendswood, Texas. He enjoys running almost every day with his mom, chasing squirrels out of his yard, playing with toys, pestering his brother Edmond, eating, napping … well, Kuma loves about everything and everyone! His mom, Lorraine Bossé-Smith, was kind enough to help him tell his story. She is the author of seven published books, writes for magazines on assignment, has been seen on national television, and inspires people to live healthy, balanced lives through personal training, life coaching, and workshops. You can reach Kuma through Lorraine’s website: www.thetotalyou.biz. Be sure to visit Kuma Dog’s Facebook page.
You never know what he’ll be up to next!