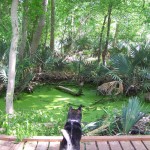 We’ve had a lovely spring here in Texas. The temperatures have been mild, the humidity low, and the bugs nonexistent. Awesome! My family and I took advantage of this great weather and headed back to hill country. During the drive, the landscape was covered in all sorts of colors: white, purple, yellow, pink, and blue. I’m not a great judge of color, to be honest, but my mom was rattling the names off as she saw different kinds of flowers blooming. Be sure to bring your camera!

This trip to hill country, we visited the Palmetto State Park off highway 183 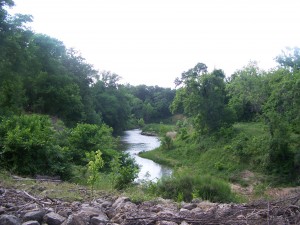 outside of San Antonio, connecting to Park Road 11. If you know where Buc-ees is, you just go the opposite direction for about five miles. Follow the brown park signs. Just a couple miles down the Park Road 11 is the park headquarters where you pay your fee or use your Texas State Parks pass. They have a nice store and restrooms for the humans. The park is along the San Marcos River and is named for the dwarf palmetto palms that grow right in the swamp. The park has camping, fishing, hiking, picnic areas, and even rents canoes and pedal boats. What a place! Palmetto State Park quickly became one of my favs!
We started off with a two-mile loop around the Ottine Swamp and Mesquite Flats. The paths are nice gravel and follow the river for a while. Jump in! Doggies do not have to fear alligators in these rivers. Wooowho! Get cooled off because you’ll want to keep hiking through the lush vegetation. The mix of palm trees, swamps, flowers, and cactus is something for the eye to see. My mom took a lot of pictures. Me, I sniffed everything! 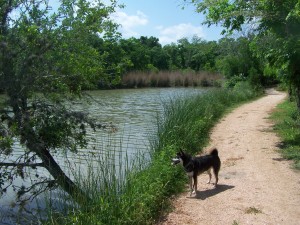 We encountered something very strange: a pond that burped! I swear; I’m not making it up. My dad said it was a mud boil. I don’t know what that means, but it was weird. You can’t miss it as it is along the boardwalk. As you weave back around, you’ll cross a bridge that has a super duper swimming hole for humans and dogs alike. The water is fairly shallow with a small current. I hear sometimes the current can get stronger, so be careful. Oh man, cooling off felt so good, but our adventure wasn’t over just yet.
We got back in the car and drove over to Oxbow Lake and took the short ¾ of a mile trail. We started off at a park where the canoes and pedal boats were kept. A bunch of ducks were enjoying a swim. I’m familiar with ducks; we have them by our house. I let them be and continued on my way. I’m a good dog! People were having nice picnics, too. Anyway, another scenic trail that puts this park high on the Kuma scale of adventures! You’ll enjoy the views, access to the water, and plenty of shade. Get outside!
Kumaito (Kuma for short) is a multi-tan Shiba Inu, an ancient breed from Japan, who moved from the Rocky Mountains of 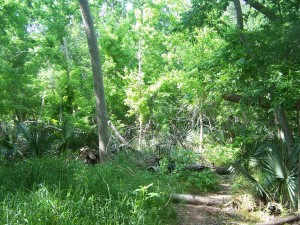 Colorado to Friendswood, Texas. He enjoys running almost every day with his mom, chasing squirrels out of his yard, playing with toys, pestering his brother Edmond, eating, napping … well, Kuma loves about everything and everyone! His mom, Lorraine Bossé-Smith, is kind enough to help him tell his story. She is the author of seven published books, writes for magazines on assignment, has been seen on national television, and inspires people to live healthy, balanced lives through personal training, life coaching, and workshops. You can reach Kuma through Lorraine’s website: www.thetotalyou.biz. Be sure to visit Kuma Dog’s Facebook page. You never know what he’ll be up to next!

Why Is My Aquarium Clo…

Looking at a crystal-clear fish tank is…

By www.petpoisonhelpline.com A record-setting 70 percent of…