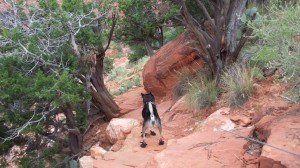 Greetings fellow canine and human friends! I am pleased to report my paws healed up relatively quickly, although I missed an entire week of running with my mom. Once I was outside, I went much slower than normal because I had to catch up on all the news. Feeling fit as a fiddle! Enough that my family and I headed back to Sedona, the land of red rock. This is proving to be one of my favorite places. The dirt is soft, and the area has more trees than by home.

As my dad was loading up the car and seemed to take forever. I get impatient some times and start howling. Does that ever happen to you? I can’t help it. It just comes out. Anyway, while he put everything in its place, my mom checked the forecast. That didn’t work out so well for us last time, but this one seemed promising. “Clouds, cooler temps, and a slight chance of rain,” she said. We were on our way. 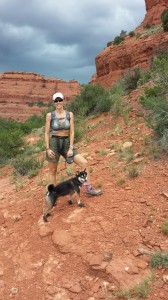 We stopped at the ranger station on the south end of Sedona to get a map. Normally, we would have to pay a fee to use Red Rock Park or hike any of the trails, but I guess I was cute enough to get us in free. Okay, I fess up. It was a holiday weekend, and everyone was getting in free. This meant the trails were going to be extra busy. We decided to head toward a less common trail called, Mescal. We had to drive through the town of Sedona with all the traffic, so it was slow going. I started pacing at the window. I was ready to get out there! Woof!

On the north side of town, we turned right onto Long’s Canyon Road and that took us to the trail head. The first parking lot was full, but we found a little spot further up. It was under a tree, and my daddy says those are the best anyway. They provide some shade so the vehicle isn’t so hot when we get back. Such a smart daddy I have!

As we got out of the car, I saw them. No, not them! Fear consumed me, and my tail drooped. I wiggled, screamed, and tried to get away, but alas, those darn booties were on my feet before I could say Shiba Inu dog. Sigh. I thought those were for when my paws were healing. Mom told me otherwise, “Those are to protect your feet from being hurt again.” Whatever; I wasn’t happy about it, but just then I was on the scent of a rabbit. Off I ran.

We immediately had beautiful views of Sedona. The sun was shining upon us, but black clouds were looming off in the distance. Mescal Trail is a loop that is about five miles long. It weaves through Long’s Canyon. It is a popular mountain bike trail, but we only encountered one family riding. 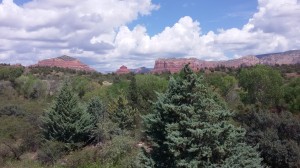 The trail is pretty easy, but it does have some scary parts where you hike on slick rock that has a steep drop off. We stuck together and hugged the canyon wall. It was so worth it, though. Long’s Canyon is gorgeous. Tall walls of red rock with green trees scattered about. The trail ahead would go around to the other side of the canyon, but we didn’t get that far. Shortly after we passed the cliffs, we heard a clap of thunder and saw lightening all at the same time. Dad said this meant the storm was right upon us. Mom and dad dropped their packs and quickly put on their rain coats. They barely had the zippers up, and the clouds let loose. Buckets and buckets of rain ascended upon us. We turned around and began running…until the drop off. It was slick in dry conditions. We had to go very slow and pay attention to every step. I could smell that my mom was a little nervous—yes, humans give off these scents that us dogs pick up on—but she pressed on and kept moving. We got through the narrow section but still had a couple of miles to go.

We were thoroughly drenched and covered in mud by the time we reached the car. It never did let up one bit. “So much for a slight chance of rain,” my mom said with a smile. Yes, we had quite an adventure, and I loved it! I even forgot about my booties, although they did rub a little since I got so wet. No matter; it was a great day. We will have to go back and finish the loop another time. If you’re ever in Sedona, check out Mescal Trail. Just don’t trust the forecast.