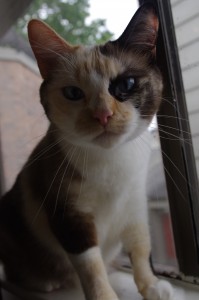 Cats are notoriously curious, playful animals. If you Google “kitten” you’ll find endless pictures of cats playing with yarn or ribbon. Many adult cats don’t lose the enjoyment of playing with these items, and will often pounce on a variety of “toys”, including things such as toothpicks, thread, dental floss, string, tinsel, feathers, needles, rubber bands, and hair ties. In fact, most cat owners can attest that cats can entertain themselves with just about anything! Unfortunately, some cats may ingest all or part of their fun “toys”. When playthings are ingested, they can sometimes get stuck. In some cases, the stuck object will cause a blockage of the intestines. When this occurs with string-like objects, it is called a linear foreign body, and may require swift surgical intervention in most cases.

If your pet has any of these symptoms, or is experiencing similar warning signs, schedule an appointment with a veterinarian as soon as possible. If your cat is suffering from a linear foreign body, as with most feline ailments, the sooner it is diagnosed and treated, the better the prognosis for the patient. Radiographs (x-rays) can be a good diagnostic tool to diagnose a foreign body that is obvious, such as when the foreign material is radio opaque (shows up clearly on radiographs). An ultrasound may also be performed to confirm the presence and location of a linear foreign body when radiographs are not definitive. Once a linear foreign body has been diagnosed, the next step is to surgically remove the foreign material.

In some cases, a concrete diagnosis of a linear foreign body cannot be made with either radiographs, ultrasound, or both. In these situations, surgery is often still recommended, as not all linear foreign bodies are apparent with diagnostic testing. A consultation with a board-certified veterinary surgeon should be considered for linear foreign body cases, as the surgery for these blockages can be intricate and delicate.

If the blockage is not appropriately addressed, or is not addressed in a timely manner, the consequences can be grave. Intestinal perforation, bleeding, and a severe abdominal or bodywide infection, called sepsis, can result from an untreated linear foreign body. Ultimately, the consequences of these complications can be fatal.

Any pet can experience a linear foreign body, but cat owners should be especially aware of this issue. Felines, with their generally curious and playful natures, are by far the most common culprits for these blockages. Cats will often try and disguise the symptoms of any problems they are experiencing, so it is important to be observant and act quickly when you notice something is “off” with your furry friend. Early detection is the key to keeping your cat as healthy and happy as possible for many feline disorders, especially if your cat experiences a linear foreign body. Make sure and visit your family veterinarian as soon as a possible problem is identified, and if the diagnosis is a linear foreign body, consider scheduling surgery with a board-certified veterinary surgeon to give your pet the best chance for an optional outcome in case the surgery proves to be intricate or complicated.