The Story of Phantom

Posted on May 13, 2015 By Rebecca Burwell FEATURED, HEADLINE, OUR COMMUNITY, PET OWNERSHIP 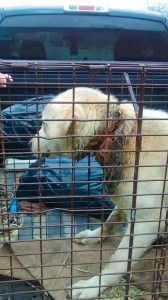 I first heard about Phantom in November of 2014. He was barely alive, wandering the streets of Magnolia for 2 years with an embedded collar. The black oozing mess that stained down his chest to his legs showed the severity of the wounds from the collar choking him. I vowed I would not give up until this dog was saved. So many people had tried to help Phantom, but he was so feral no one could approach closer than 50ft. I had no idea how to catch him, I only knew I was going to need a lot of help. I started making phone calls. I called Animal Control, I called rescue groups, I reached out on Facebook….I didn’t sleep some nights worrying about him. After a lot of effort I located some amazing women that lived near Phantom and had the same intense concern for him. They too had been watching….and trying to help him for 2 years. We started meeting at the gas station where Phantom was seen frequently. We had no idea what to do. But we didn’t give up. Stephanie Brown, Stephanie Dunlap and Pauline Mendoza encouraged me to put together a Facebook Page so we could coordinate our efforts. We found a woman, Polly Wark, who had a large dog trap. We found Sandra Olvera, who let us put the trap on her property. Through Facebook we asked people to post sightings of Phantom, so we could track him. The pieces started coming together. On February 20th we finally got him. It had been 4 long months. 4 long months of these ladies tracking in the woods, knocking on doors and never tiring of helping this dog. 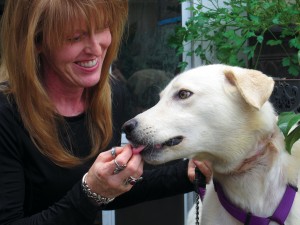 Phantom’s collar was surgically removed from his neck by the wonderful staff at Bear Branch Animal Hospital. He underwent 20 days of medications and twice daily wound cleaning at my home. He will have permanent, deep scars around his neck, but he is alive because of a wonderful group of people that rallied around him. All his surgical needs were paid for by donations from his Facebook community. Phantom’s story is one of perseverance and never giving up. It is about asking for help from strangers, something we do little of today. I could not have done this alone. Phantom’s rescue took a village. That village was women I did not know, but found through a common interest to save a life. Phantom is alive today because a community came together. This is the lesson he wants us to hold onto. Do not be afraid. Together we are POWERFUL and we can move MOUNTAINS. Remember Phantom when you want to change the world. Ask for help. You are stronger than you think!

Folks are baffled when I suggest to…

2 Responses to The Story of Phantom