The Therapy Dogs of Houston Hospice

Posted on July 29, 2014 By Rebecca Burwell FEATURED, HEADLINE, OUR COMMUNITY 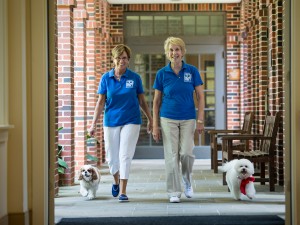 In the midst of the largest medical center in the world, the 1920s estate of a former Houston Mayor has become an oasis. The Tudor-style façade of Houston Hospice sits in stark contrast to its frenetic surroundings. Behind ivy covered walls, French doors and mullioned windows overlook moss-covered paths and a sparkling pond that reflects low hanging branches of century old oaks. In this tranquil place it’s not unusual to see dogs trotting through hallways or sprawled, cooling their bellies on the smooth floor. These contented therapy dogs feel at home, and without trying they share a sense of normalcy; of being at peace in this place.

The story of therapy dogs at Houston Hospice began 10 years ago when long-time volunteer Ann James rescued a particularly docile Golden Retriever named the Chrissy. When Chrissy cheered an elderly neighbor by laying her head in the woman’s lap, Ann realized her newly rescued dog was a natural therapy pet. Ann found a certification program through Faithful Paws, a ministry of Bellaire United Methodist Church, and recruited fellow Golden Retriever owner and friend, Lynn Hoster, to join her. After training and certification Chrissy, and Lynn’s dog, Dixie, became the first Houston Hospice therapy pets. As other volunteers became inspired by Chrissy and Dixie’s example, more dogs joined the ranks.

I had the opportunity to shadow our pet therapy volunteers and their pups in June. The first foursome I met was Chris Chisholm with her rescued Cavalier King Charles Spaniel, Jazz, and Judy Anderson with her Bichon Frise, Casey. They were excited to share their enthusiasm for pet therapy. Chris said, “I’m so glad you’re writing this story because people need to know that Houston Hospice is a great place to volunteer.” Chris and Judy told me Jazz and Casey love people. They make sure the dogs are freshly washed because they even jump into beds and snuggle up to patients. When I asked Chris and Judy what surprised them about visiting Houston Hospice, they said it was learning that caregivers and family members really appreciate the visits. Judy said, “Sometimes patients are unresponsive, but their families are helped. The visits bring them happiness at a very stressful time.” As we walked the halls, every soul we encountered smiled the moment they saw the dogs — broad, unabashed smiles; the kind that spring from real joy. As they trotted by, Jazz and Casey were like fairies scattering magic dust; leaving laughter in their wake along with exclamations of, “They’re so pretty!”, and “They look like stuffed animals!”

There have been somber moments too. On their very first visit, Chris and Judy entered the room of a five-year-old little girl. Life was ebbing away and she had been unresponsive all day. Chris asked the child’s mother if she could place Jazz on the little girl’s bed. The mother agreed, and Jazz, who normally never licks, began licking the girl’s hand. The girl moved her hand. Then Jazz moved up and began licking the little girl’s face. The child opened her eyes and her mother asked, “Do you like the dog honey? Isn’t he pretty?” The little girl responded, saying, she liked the dog. When it was time to leave, the girl’s mother followed Chris and Jazz into the hall and walked into Chris’s open arms sobbing. The child died that night. Because Jazz instinctively knew what to do, the mother had a few more moments with her little girl before she died. Chris and Judy said this event showed them that visiting hospice was what they and their dogs were meant to do.
Next I trailed along with Loretta Uzick and her Yorkshire Terriers, Cricket and Skyler. Cricket’s a pro and Skyler is an adorable four-month-old puppy in training. Loretta’s most memorable visit was with her first therapy Yorkie, GiGi. They came to the room of a patient who was surrounded by family members, with some spilling into the hallway and more waiting in the nearby family room. The patient was a woman who had been unresponsive for three days. The woman’s sister asked Loretta to bring GiGi in because the patient loved dogs. Another family member objected, but eventually the sister won the argument and asked Loretta to place GiGi on the bed. The patient awakened and began speaking to GiGi. Word spread and family members poured into the woman’s room to speak to her. As Loretta left the family thanked her for giving them one more opportunity to speak to their loved one.

My final ‘walk along’ was with Cassie Chiaro and her Yorkshire Terrier, Vala, and Brenda Chan and her Gold Retriever mix, Andie. Cassie and Brenda said there have been many surprises during their years of visiting patients and families at Houston Hospice. The biggest surprise and the most moving moment for them occurred when a family asked them to enter the room moments after their loved one had died. The room was filled with family members who stood in reverential silence. Brenda and Cassie couldn’t believe they were asked to enter such a sacred and personal space, sharing the family’s last moments on earth with their loved one.

Please note that the photo used in this article was taken by professional photographer Lehane Richards of Houston, TX. Visit Lehane’s website for more information and to contact them about scheduling your next photo session!

Pets in the Wildflower…

The July Issue is on the stands…

2 Responses to The Therapy Dogs of Houston Hospice