Cancer and Dogs: One Pet’s Tale 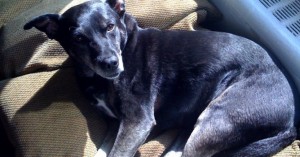 Two years ago, for roughly the 15,000th time, I patted our dog Newman on the head. That time my fingers found an unexpected depression half the size of a ping-pong ball above and behind his right eye.

Thinking he had somehow bashed in his skull, my wife Jennifer and I rushed Newman to a nearby veterinarian, who quickly set us straight. His skull was fine. Rather, the bulky muscles of Newman’s forehead and jaw had withered, revealing the bony contours beneath.

The most likely cause was a brain tumor. With that suggestion, we plunged into a two-year lesson in the treatment of canine cancer.

The National Canine Cancer Foundation estimates that one out of every three dogs gets cancer, in part, because modern pets’ longer life spans allow more time for malignancies to develop. The breeding practices that created pugs, Afghans and every other variety also littered the species’ DNA with predispositions to health problems. Newman was neither particularly old nor overbred: he was a nine-year-old, 40-pound black mystery breed with hints of terrier and shepherd whom Jennifer had found at a rescue shelter. He might simply have fallen victim to one of those unfortunate spontaneous mutations that cause cancer, for which no satisfying explanation exists.

An MRI scan confirmed that a neural sheath tumor wrapped around Newman’s fifth cranial nerve had choked off signals to his facial muscles and caused them to atrophy. With such brain tumors, chemotherapy is problematic because the brain protectively isolates itself from most compounds that enter the bloodstream—the so-called blood-brain barrier. Our vets therefore suggested that the best course might be a sophisticated (and, alas, expensive) therapy in which robot-guided beams of gamma rays would zero in on the tumor with minimal harm to surrounding brain cells.

With summer in full swing, The Hub…

Not just for passing gas any more!…

One Response to Cancer and Dogs: One Pet’s Tale