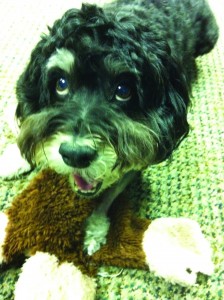 By: “Barnum” Condon; A special thank you to Gulf Coast Veterinary Specialists for saving Barnum!

Have you missed me?  I am sorry that I haven’t been sniffing around your neighborhood.  I have missed you.

I hope that over muscled Boxer, Alfred next door hasn’t stolen your heart.  You know he is all good looks and no manners, honestly he just slurps his water everywhere when he has a drink.  You and I both know that Rufus, the English Bulldog around the corner is just so full of himself.

I do hope that you have been able to spend time with your girlfriends.  Have you seen Sweet Belle?  I have always liked Boston Terriers, they have a lot of energy.  How is Savannah? Now there is a Boxer with manners, even if she is deaf.

The reason I have not been around is that I have been very sick.  Since my owners picked me up from the Havanese Rescue Home, they have always taken such good care of me.  I never get people food.  I have impeccable taste  and never eat “icky” stuff outside.

I woke up one morning and started having a really bad stomach ache.  I did not want to eat, which as you know is rare for me.  I just wanted to lay down and have my chin stroked.  My owner took me straight to this wonderful place.  It was called the Gulf Coast Veterinary Specialists.   At first I was really scared but I felt so bad I did not care.  They had to do a lot of tests.  They took some blood.  The needle hurt but the lady was very gentle.  They took pictures of my tummy.  I had to have my legs shaved so they could put an IV (whatever that is) so I could have something to drink.  I was so thirsty but the water just would not stay in my tummy.  I had to stay at this hospital for  a long time while they tried to make me better.  I had the best doggy doctor taking care of me.  I liked her right away.  She had a beautiful name, Brisa, but everyone called her Dr. Hsieh.   She was so kind and gentle with me and I felt very safe with her.  I was feeling a bit better after a week so they finally gave me some soft mushy food.  It tasted good and it stayed in my tummy.  They took the IV out and let me go home, but I still had to take pills.

I was so glad to be home, but the next day I got sick again.  It was Saturday night and my owner was so worried she called the Gulf Coast Veterinary Specialists and guess who answered the phone?  YES,  Dr. Brisa.  She was there and said to come right over.  I can’t tell you how great it was to see her waiting for me.  I was so sick, my tummy hurt really bad all the way up to my mouth.  She took me and gave me a cuddle and I knew she would make everything better.  I think she was as sad as my owners when she told us that I had to have surgery.  I did not know what that meant but it sounded scary.  I don’t even remember what happened.  I woke up the next day with tubes everywhere, in my legs and up my nose.  I really hated that.  I was still very sick but Dr. Hsieh was there every day to check on me.  The technicians were so kind and gentle.  My owners came every day to see me.  I was still sick for 3 more days and heard my owners tell Dr. Hseih to do everything they could for me.  Dr. Hseih even said that she  had a few more things in her pocket to help me.  So that is where she kept them?!

It was a miracle.  I started feeling better and better.  They took that awful tube out of my nose.  Dr. Hseih finally gave me some food.  I was STARVING.  They also took the needles out of my leg.  Wow, I was a new dog.  I stayed for a few more days so Dr. Brisa could make sure that I was really OK.  She did not want me to have a relapse – I think that means get sick again.  When she would come in and not have time to play with me I could go over to the other technicians and they would give me attention and even let me sleep at their feet while they were on the computer.  I was so special that I would go to the pharmacy .  They loved me there.  Dr. Brisa would be so busy sometimes and could not play with me but I would bark and bark and she would finally come and give me some attention.  She even let me help her with her computer work.

I was finally able to go home but I was also sad that I had to leave my Brisa.  I became so attached to her and love her very much.  Her husband came and took some pictures of me.  I think he just wanted to check me out.  Don’t worry my heart still belongs to you.

I hope I get to go see her soon.

When I got home my bratty brother, Bailey, wasn’t even glad to see me.  I think he wishes he were an only dog.

I will be by soon to see you and I hope the rumor about your being on a reality TV dating show is not true!

One of the Houston Zoo's most special…

Lulu’s looking for a new home after…