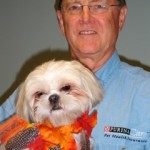 HOW IS THANKSGIVING DINNER DANGEROUS FOR PETS?

Purina Care shares the dangers posed to pets around Thanksgiving are as bountiful as the bread stuffing. In general, pets’ stomachs are not accustomed to handle the heavy seasoning we use to cook and prepare our foods. Some of the foods commonly found on the Thanksgiving menu are toxic to pets. Raw or undercooked turkey may contain salmonella bacteria and fat trimmings or very fatty foods can trigger pancreatitis in dogs and cats. Even if it is just a scrap from the table, it may be enough to cause an upset stomach in our pets, resulting in vomiting or diarrhea.

•    Bones – Many pet owners want to hand over left over bones from the turkey, ham or steak to the dog, but these small bones can become lodged in the throat, stomach, or intestinal tract or break into splinters, causing extensive damage to the stomach and gastro-intestinal tract if swallowed, even puncturing the small intestines.

•    Dough and Cake Batter – The combination of raw bread dough and the pet’s body heat can cause the dough to rise inside the stomach, resulting in vomiting, severe abdominal pain and bloating. The batter used in cakes and pies usually contains raw eggs which could contain salmonella bacteria that may lead to food poisoning.

•    Onion and Garlic – These ingredients contain sulfides, which are toxic to animals and can cause the destruction of red blood cells, especially in cats, causing Heinz body anemia.

•    Sage – This, as well as many other herbs, contain essential oils and resins that can cause gastrointestinal upset and central nervous system depression to pets, especially in cats.

•    Raisins and Grapes – They are a choking hazard to pets and ingestion of either can cause significant kidney damage.

•    Walnuts and Macadamia Nuts – These can cause weakness, depression, incoordination, and tremors. In addition, the high fat levels of these nuts may cause pancreatitis in dogs, resulting severe vomiting and diarrhea.

•    Chocolate – Chocolate can be toxic for pets, or even fatal, due to a substance called theobromine found in chocolate.

•    Mushrooms – These can produce damage to a number of internal organs, including kidneys, liver, and the central nervous system. If a dog eats mushrooms, seizures, coma, vomiting, even death can occur.

•    Chewing Gum and Candy – Many contain Xylitol, an artificial sweetener that can cause a severe drop in blood glucose in dogs and As soon as 30 minutes after ingestion, dogs can begin to show signs of depression, loss of coordination, and seizures. Xylitol may also lead to delayed onset damage to the liver occurring days to weeks after ingestion. Xylitol toxicity in pets may be fatal and requires immediate medical attention.