“Cat Diaries: The First Ever Movie Filmed by Cats” 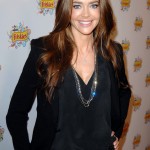 Friskies® celebrated “Cat Diaries: The First Ever Movie Filmed by Cats” with a red carpet premiere and cocktail party last night at The Grove in Los Angeles.  Celebrity cat lover DENISE RICHARDS was in attendance. The film was screened prior to a special engagement of a recently released full-feature animated film.

FRISKIES® brand cat food debuted its first-ever movie filmed by cats.  From apartments to homes, from New York to California, viewers were taken on a tour across the country to see the world through a cat’s perspective. The feline stars of the film donned video cameras on their collars to provide around-the-clock coverage of their daily lives while their owners were both home and away.

This four-minute film captivated the audience and Karina and Denise both thought it was so cute and hated that it ended so soon! The film can be found online at www.friskies.com/repurrters

Hollywood has some new stars in town and they’re pretty cool cats – literally! Last night, Friskies® brand cat food premiered “Cat Diaries: The First Ever Movie Filmed by Cats” and gave viewers a look into their magical world. This short film features documentary style footage taken directly from cats, who donned video cameras on their collars to provide around-the-clock coverage of their daily lives. From apartments to homes, from New York to California, viewers are taken on a tour across the country to see life from a cat’s perspective.

In true Hollywood fashion the film was unveiled during a red-carpet event at The Grove’s Pacific Theatre in Los Angeles. While the film’s feline stars took center stage for the evening, celebrities like film and television actress Denise Richards were on hand to help celebrate. A VIP cocktail reception kicked-off the evening at the Whisper Lounge and a special screening of a recently released animated film directly followed. It was the purrfect Tinseltown event.

To create the four-minute film, a handful of cats from across the country were equipped with HD video cameras around their collars to collect documentary style footage of their daily lives. The film stars a number of these “celebricats” including Charlene Butterbean, Fudge, Gizmo and Milo as they explore, play and enjoy life. Friskies worked with Los Angeles based director/producer Erik Denno and editor/director Jason Farrell to spotlight cats on the silver screen. Bryan Lee Brown and Paul Figueroa created the film’s original music.

“Friskies wanted to share the magical world of cats in an entirely new way. We want the whole world to see and enjoy cats’ unique personalities and perspectives,” said Daniel Henke-Cilenti, senior brand manager of Friskies. “To give cats the spotlight they deserve, we made them the stars of their own film and celebrated in true Hollywood fashion.”

“Cat Diaries: The First Ever Movie Filmed by Cats” is a documentary style short film that takes you on a coast-to-coast adventure revealing the magical world of our feline friends. Using footage taken directly from cats, this whimsical film gives viewers a firsthand look at life from a cat’s perspective. The film features “celebricats” from across the country like Charlene Butterbean, Fudge, Gizmo and Milo as they explore, play and enjoy life. The film was created by Los Angeles based director/producer Erik Denno and editor/director Jason Farrell and features original music from Bryan Lee Brown and Paul Figueroa. To view the film online, please visit www.friskies.com/repurrters.