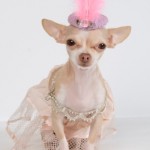 1.    Be careful with Halloween decorations.  Pumpkins and corn are considered to be non-toxic, but they can create gastrointestinal problems when ingested by a pet. Intestinal blockage could even occur if large pieces are swallowed. Additionally, curious pets can easily knock over a lit pumpkin over and cause a fire.

2.    Make sure your pet’s costume is safe. The costume should not constrict the animal’s movement or hearing, or impede his ability to breathe, bark or meow.

3.    Have pets try on costumes a day or two before wearing them. If the pet appears distressed, has an allergic reaction, or shows abnormal behavior, remove the outfit.

4.    Take a closer look at your pet’s costume and make sure it does not have small pieces that could lead to a choking incident. Poor fitting outfits can get twisted on your pet, leading to injury.

5.    During prime trick-or-treat hours, keep shy dogs in a separate room. Too many strangers can be scary and overwhelming for pets.

6.    When opening the door for trick-or-treaters, make sure that your cat or dog doesn’t run outside unexpectedly. Always make sure your pet has the proper identification. If for any reason your pet escapes and becomes lost, a collar and tags and/or a microchip can increase the chances that he or she will be returned to you.

7.    Sorry Fluffy, but Halloween treats are just for kids. If you have a pet in the house,  be mindful of the following:

Tin foil and cellophane candy wrappers are a choking hazard for pets, in worst cases ingestion may cause intestinal blockage.

Chocolate can be very dangerous for dogs and cats. Symptoms of significant chocolate ingestion may include vomiting, diarrhea, hyperactivity, increased thirst, urination and heart rate, and even seizures.

Candies containing the artificial sweetener xylitol can be poisonous to dogs. Even minimal amounts of xylitol can create a sudden drop in blood sugar, which leads to depression, lack of coordination and seizures. In cases of significantly low blood sugar, liver failure has been known to occur. Avoid lollipops and hard candies when you are around your pet.

Where a dog can be a dog®

In just 10 years, Camp Bow Wow, the premier doggy daycare and overnight camp, has grown to include over 100 Camps across North America, becoming a $50 million business. The company was recently ranked as the 447th fastest growing private company on the INC magazine 500 for 2009 list.

The Camp concept provides the highest levels of fun, safety and service for its campers, and peace of mind for their parents. Dogs romp together in an open-play environment and pricing is all-inclusive.  New services include Bow Wow Behavior Buddies, an in-home dog training program, which will launch in May 2010.  Since the Boulder, Colorado-based Company started franchising in 2003, Camp Bow Wow has sold more than 275 franchises in 39 states, plus one in Canada, over 41% being women-owned. As Camp Bow Wow grows, our simple philosophy remains the same: It’s all about the dogs.

We all know that we as…

Beat the heat this summer at our…

Get Your Goblin Ready …

Ready to have some wacky, ghostly fun…