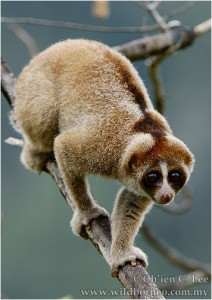 As you probably know by now, I’m a wildlife lover! I thought this story that came over the wire today is interesting and perhaps you might think so too so I wanted to share it with you. Our world is so fascinating ~ Michelle Mantor

Photo: One of the newly identified species of slow loris, Nycticebus kayan. CREDIT: Ch’ien C Lee – Three New Species of Venomous Primate Identified by MU Researcher – Research may help protect rare primate from illegal trades: A venomous primate with two tongues would seem safe from the pet trade, but the big-eyed, teddy-bear face of the slow loris (Nycticebus sp.) has made them a target for illegal pet poachers throughout the animal’s range in southeastern Asia and nearby islands. A University of Missouri doctoral student and her colleagues recently identified three new species of slow loris. The primates had originally been grouped with another species. Dividing the species into four distinct classes means the risk of extinction is greater than previously believed for the animals but could help efforts to protect the unusual primate.   “Four separate species are harder to protect than one, since each species needs to maintain its population numbers and have sufficient forest habitat,” said lead author Rachel Munds, MU doctoral student in anthropology in the College of Arts and Science. “Unfortunately, in addition to habitat loss to deforestation, there is a booming black market demand for the animals. They are sold as pets, used as props for tourist photos or dismembered for use in traditional Asian medicines.”

According to Munds, slow lorises are not domesticated and are protected under the Convention on International Trade in Endangered Species. She contends that keeping the animals as pets is cruel and that domesticating them is not feasible.  “Even zoos have difficulty meeting their nutritional needs for certain insects, tree gums and nectars,” said Munds. “Zoos rarely succeed in breeding them. Nearly all the primates in the pet trade are taken from the wild, breaking the bonds of the lorises’ complex and poorly understood social structures. The teeth they use for their venomous bite are then torn out. Many of them die in the squalid conditions of pet markets. Once in the home, pet keepers don’t provide the primates with the social, nutritional and habitat requirements they need to live comfortably. Pet keepers also want to play with the nocturnal animals during the day, disrupting their sleep patterns.”

The newly identified species hail from the Indonesian island of Borneo. Munds and her colleagues observed that the original single species contained animals with significantly different body sizes, fur thickness, habitats and facial markings. Museum specimens, photographs and live animals helped primatologists parse out four species from the original one. Now instead of one animal listed as vulnerable by the International Union for the Conservation of Nature, there may be four endangered or threatened species. This potential change in conservation status may serve to draw attention the plight of the primates and increase legal protections. “YouTube videos of lorises being tickled, holding umbrellas or eating with forks have become wildly popular,” said Anna Nekaris, study co-author, primatology professor at Oxford Brookes University and MU graduate. “CNN recently promoted loris videos as ‘feel good’ entertainment. In truth, the lorises gripping forks or umbrellas were simply desperate to hold something. The arboreal animals are adapted to spending their lives in trees constantly clutching branches. Pet keepers rarely provide enough climbing structures for them.”

The pet trade isn’t the only threat to loris survival. The animals also are used in Asian traditional medicines. The methods used to extract the medicines can be exceedingly violent, according to Nekaris, who also is director of the slow loris advocacy organization, Little Fireface Project. For example, in order to obtain tears of the big-eyed lorises, skewers are inserted into the animals’ anuses and run through their bodies until they exit the mouth. The still-living animals are then roasted over a smoky fire and the tears that stream from their eyes are collected and used to supposedly treat eye diseases in humans.  A video about the illegal trade in slow lorises can be viewed here: Tickling Slow Loris – The Truth

“Taxonomy of the Bornean Slow Loris, with New Species Nycticebus Kayan,” was published in the American Journal of Primatology. The paper described the physiological and habitat differences that justified dividing the three new species of slow loris (N. bancanus, N. borneanus and N. kayan) from the original species of slow loris N. menagensis. Susan Ford of Southern Illinois University also was co-author.

June Is Bridal Month A…

May Issue of Houston P…

We are thrilled to feature John Paul…