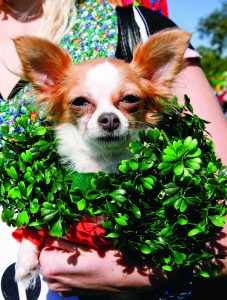 The “pup”-ular Howl-O-Ween Fest also raised more than $2,000 for local pet rescue groups. It was the fourth year Bridgeland, a project of The Howard Hughes Corporation, has hosted the event.

“This is probably the largest event we’ve hosted in Bridgeland, with the crowds surpassing the 7,000 visitors we had earlier this year for our annual Nature Fest,” said Bridgeland’s Peter Houghton. “Everyone seemed to have a great time watching the many stage shows, admiring the dogs and children in costume, shopping the many vendors and watching amazing faces emerge from carved pumpkins.”

The work of Villafane Studios sculptor Alfred Paredes was an event highlight. He displayed several completed pumpkins with intricately carved faces and then worked on dog-inspired pumpkins during Howl-O-Ween Fest explaining to crowds how he works and sharing tips on how to carve 3-D pumpkins at home. Straight from New York City where he carved the world’s largest illuminated pumpkin, it was Paredes’ first visit to Texas.

Other activities included a splashy stage show by Pets Overboard, Guennadi and his world-famous dog and clown act, 3-D chalk artist Anat Ronen, a chance for people to create wax hands and carnival-themed games and rides sponsored by The Foundry Church. A caravan of food trucks, including Houston favorites Bernie’s Burger Bus and The Golden Grill, quieted hunger growls.

Ranked among the nation’s top master planned communities, Bridgeland was named “Developer of the Year” earlier this month in the Greater Houston Builders Association’s Houston’s Best PRISM Awards. For more information on Bridgeland, which is also part of The Woodlands Development Company, visit www.bridgeland.com. Photos by John Everett; Submission by Total PR. 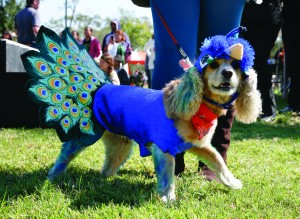 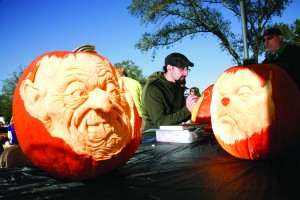 YOU’RE INVITED TO THE GRAND OPENING OF THE UPTOWN…