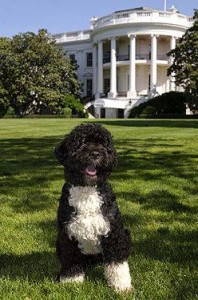 Dog lovers have something extra to commemorate today because U.S. Presidents dating back to George Washington have been dog lovers themselves.

The current canine living in the White House is Bo, a Portuguese Water Dog. He is popularly known as the “First Dog” of the United States.

Many presidents’ dogs have achieved fame in their own right. Nixon’s dog Checkers played a big part in his career. Thomas Jefferson owned two Briards. And there was Clinton’s Buddy, a Lab who famously fought with Socks, the First Family’s cat. A good dog trainer could have helped that situation!

Scottish Terriers have a distinguished history in the White House. George W. Bush and his wife Laura owned two. Franklin D. Roosevelt’s Scottie Fala was even the subject of a political scandal when FDR was accused of spending taxpayer money to retrieve his forgotten dog. Scotties have been called the most popular breed with Presidents.

Presidents have had other animals as pets too. There was Pol, Andrew Jackson’s parrot, who was taught to swear. Herbert Hoover owned two crocodiles and Siamese cats lived in the White House with Gerald Ford and Jimmy Carter.

Will Your Dog Only Lis…

Will your dog only listen to you…

Aromatherapy can be beneficial with precautions.  You…

Kids and Dogs: A Crazy…

Kids and dogs just go together –…