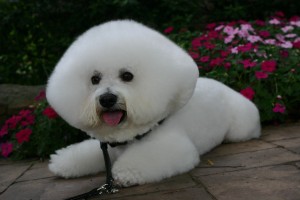 What goes into a good dog grooming? Have you ever wondered about some of the terms used at dog shows or on TV series like Animal Planet’s A Groomer Has It? There’s a lot more to a good grooming job than one would think! Know your terms, so you’ll know what you’re getting or at least you’ll know what the heck they’re talking about on these reality shows!

Hand Stripping: Groomers use a technique called hand stripping to remove the top coat and leave the under coat so a healthier top coat can grow in more coarse.

Carding: Carding is a process that removes the dead fur on a dog’s undercoat to eliminate shedding.

Stacking: Stacking is a professional term used in dog shows. Owners must position, or “stack,” dogs according to official guidelines when they are reviewed by judges. A “free stack” is a term used to describe when the dog positions itself.

Scissoring: Groomers use sharp scissors and a metal comb to do finishing trim work on a dog’s coat. Scissoring is the technique groomers use to put the final touches on the coat after clipping and shaving.

Coloring: Groomers use safe, non-toxic materials to dye dog fur. Some groomers use brushes to completely baste a dog’s fur. Others use blow pens, similar to airbrushes, to stencil designs or draw freehand on the dog’s coat.

Dry bathing: If a dog does not require a full bath, some groomers will choose to dry bathe it. Many dry bathing products exist, including sprays or foams, which can eliminate grease or oil from the coat without having to get the dog wet.

De-matting: When dogs shed, the fur sometimes remains below the surf’ace of the dog’s top coat. If it is not removed, the shed can become matted. Groomers call the process of removing these mats de-matting. Removing mats can sometimes be painful for a dog, so groomers take special care to ensure the process is as comfortable as possible.

Clippers: Groomers use clippers to take length off of a dog’s coat. Groomers attach different blades and combs to the clipper, which works like a razor. To give the dog a proper cut, groomers run the clippers with the grain of the hair.

Slicker brush: Slicker brushes are square, flat brushes with wire bristles used to remove mats and tangles in a dog’s coat. Groomers usually follow up this technique with a metal comb to ensure they have removed all knots.

Cage dryer: When using a cage dryer, groomers place a dog in a kennel. Then, they attach a dryer, similar to a fan, in front of the cage so the air circulates throughout the cage to dry the dog. The dryers have different settings so as not to overheat the dog. Kennel drying can be extremely dangerous if not properly supervised.

Plucking: When a dog is shedding, some groomers will use their fingers to grasp hair and yank it from the dog. The procedure is not always comfortable for the dog and not all groomers recommend it.

Houston heat can be stifling, and the…

Why Is My Cat Bald?