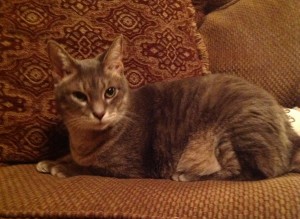 reunited a cat with his original owners, Ron and M’Lee Brooks, in an emotional and fulfilling moment.

The cat had wandered away a little too far from the Brooks’ home in 2004 and eventually found a new life with a new owner where he lived for the next eight years. A friend of the cat’s previous owner, who had taken the cat into his home in late 2004, surrendered the feline to BARC in late September 2012.

“He was just a kitten when he wandered up to our house in College Station as a stray almost nine years ago. We called him Gray Kitty,” said M’Lee Brooks. “He loved to explore the outdoors, but was kept inside most of the time. About 4 months after we moved to the Houston area, he went outside with his cat friend, Little Kitty, and he disappeared. We posted lost signs and did everything we could to find him. After a lengthy search, our only hope was that he had found a good home with a new family because he was such a friendly cat.”

Every animal that is taken into BARC is evaluated and scanned for a microchip immediately upon intake. Employees discovered the cat had previously been microchipped at the Brazos Animal Shelter many miles away in Bryan, Texas. A BARC employee promptly contacted the Bryan animal shelter to try and find any available information on the cat’s original owners. After doing some research into his past, the BARC employee was able to contact the family whose name the cat had originally been registered under many years ago.

A quick phone call to Ron and M’Lee Brooks confirmed that the cat had been the Brooks’ family pet more than eight years ago. For the past eight years, the kitty’s name had been P.J. Now that the cat once again lives with the Brooks family, they call Submit for Approval him Gray Kitty, just as they had done before he wandered away.

“When we called the Brooks’, they were excited and completely speechless,” said Julisa Mendoza, the BARC employee that contacted the Brooks family. “Gray Kitty had been missing since 2004 and now they suddenly had the opportunity to bring him back into their lives!”

The Brooks’ family dropped everything and drove to BARC Animal Shelter and Adoptions to pick up their long-lost cat. It was a moment they never expected to happen.

“We’re so glad to have him home,” said Brooks. “And we aren’t the only ones. Gray Kitty has also been reunited with his best friend, Little Kitty, who has lived with us since before Gray Kitty left. They have started bonding again and will hopefully once again become inseparable.”

Gray Kitty is successfully getting re-acclimated with his family after many years away. He’s a full-time inside cat and enjoys being pampered and tended to at all times. The Brooks’ are elated now that Gray Kitty is home, and they don’t plan to let him out of their sight anytime soon.

“This just goes to show how incredibly important microchipping a pet can be for a family,” said Alfred Moran, Director of the City of Houston Administration and Regulatory Affairs Department which oversees BARC. “We are thrilled that we had the opportunity to re-unite a pet with his family after so many years apart. This is a perfect example of why we take so much pride in what we do at BARC Animal Shelter and Adoptions every single day.”

This little cutie pie, Wellford, is up…