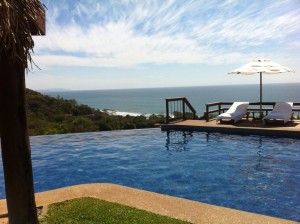 Happy New Year! I hope you have had a chance to pick up your Jan/Feb Annual Double Issue of Houston PetTalk that hit the stands last week. Our feature story, A Look Back In Time At All Things Pet is full of history and trivia that you will enjoy and great “period” photography by Robyn Arouty, modeled by Heidi Van Horne. You can find a copy at Specs, Walgreens, PETCO or 1000 other independent locations.

The Jan/Feb Double issue is published as a double issue primarily to give me a chance to have Christmas time with my children and then a vacation to kick off the New Year (monthly publishing is so full of deadlines that travel is a challenge during the year!). This year, I decided on Costa Rica because I love nature, animals, the beach and one of my resolutions is to learn YOGA and Costa Rica seems to be one of the YOGA capitals of the world.

So here I am, on the Pacific Coast, with a spectacular view of the ocean from a mountainside infinity pool. Mega relaxing. Now, getting here was a real challenge to both my patience and my sense of security. I had heard Costa Rica did not have “the best roads” but I figured that was just in the more remote areas. Incorrecto! I have several friends with homes here, lots of friends that have traveled here, I read about the tons of tourists that visit here…so how bad can it be? Let’s just say I’m glad I don’t wear dentures because my teeth would have fallen out by the time I made the painful 4 hour drive from the airport to our destination. We went through lots of rural areas with winding, hilly roads that were paved. They weren’t so bad, just time consuming and the poverty is a wake-up call that once again reminds us that living in the US is full of privileges that we need to appreciate!

The last hour of the trip was all dirt, rocky, winding roads. It took all of my mental muscle not to scream “let me out of here” …but then where the hell would I be? In the middle of a jungle on a dirt road. So, I had no choice but to tough it out. And, as has been said by others, the ride through this country is somewhat tortorous, however, the oasis of beauty and serenity that you find at the end of the journey is what it’s all about!

So far, I’ve not seen a Howler Monkey or a Parrot, which of course is a big disappointment but I’m not giving up. I did not know that Macaws and the large Green Parrots are endangered in Costa Rica and there are approximately only 2000 Macaws and 500 Green Parrots left in the country. So sad. But, there are conservation programs going on and there is an effort to release captive birds back into the wild so let’s cheer for their success.

The other creature on my “must see” list is Iguanas. I love watching them but so far, only UNO Iguana has crossed my path and of course I didn’t have my camera. I walked to the town square yesterday, expecting a town. What I found was about 6 buildings and a grassy area with some dogs and chickens. Good enough…so I snapped a few pics…mostly chihuahuas/mixes. Very friendly. No dog on a leash although traffic goes by. But as you can see from this pic..one thing is universal about dogs..they all love a tummy rub! 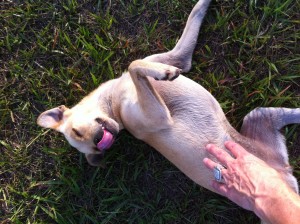 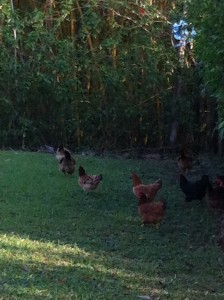 So far, there have been very little insects which is fabulous! I was expecting lots of mosquitos given the lush land but either I’m in a well sprayed area or perhaps this time of year is not rainy season, which diminishes the bugs.

Food is good but not great. I’ve had an exceptional ceviche and an average lobster and fish soup. But I can say the people are incredibly friendly, helpful and speak great English! I know Costa Rica places a large value on education (they abolished their military about 60 years ago to spend the money on education and health care)…now, if they could just focus on the roads!

This morning I had a nice YOGA experience that was somewhere between Nirvana and Hell but I have faith that everything that hurts now will still hurt next time, but maybe not 20 times from now.

Til next time….(I’m off to a zip lining adventure so hopefully there will be a next time)!!

Get ready to party as Animal Tales…

With summer in full swing, The Hub…