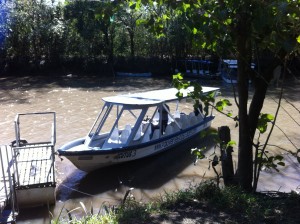 Day 5 rocked…he best day of the trip! Every day has been great but day 5 was our excursion day and it was so rich in experience and information that I could write a book, not a blog. All I can do is leave many things out of my description and try to be brief but just so you know, this “ain’t the half of it”!

Our excursion was an authentic Costa Rican experience. We had several choices…river kayaking, ATV riding, surfing lessons (not!) or, the excursion we chose, which was a journey to Palo Verde National Park. I had to finally see my monkeys which our guide guaranteed 100% that I would see monkeys whereas the other excursions were just possibilities. I was sold by that fact alone.

We started the day with a one hour journey with the most incredible guide you could ever hope for, Harold. He was like a walking Costa Rican encyclopedia and in fact, he carried a thick book with him detailing the various plants, trees and animals of the area. Before leaving the multi-acre property where we met up with Harold, he had already stopped twice to tell us about a several facts including a particular tree that is believed to carry the souls of the dead in the trunk and then as the soul progresses it becomes the leaves and then the flowers and then is released (did James Cameron base Avatar on this idea?). Of course I had to ask if they ever cut those trees down and he said “of course”. So much for that soul, heh?

About 25% of Costa Rica is set aside as national parks or reserves as part of a conservation program to stop the deforestation and loss of wildlife. Not only are the Scarlett Macaws and Green parrots endangered but many other species are as well including the Jaguar. I asked Harold about the fact that Costa Rica is situated between Panama and a military-based government, Nicaragua and Costa Rica doesn’t have a military…how do they protect themselves. His opinion was that Costa Rica doesn’t have any resources that others want (no gold, diamonds, oil, etc.) so they chose to spend the money on health care and schools. He noted that Costa Rica only has wildlife/tourism and crops of fruit and sugar cane,which are not really worth fighting over. I think this may prove to be a naïve view but then again, I’m not an expert on the Central American geopolitical scene.

On the trip, we learned a lot about the rainy season (April to November) and how the plants and animals handle the dry season versus the rainy season. Very interesting strategies but too much to detail here. Along the way we stopped at a roadside “shack” where some Nicaraguan immigrants were selling watermelons (see pic). Harold picked a nice round one, hopped back in our Montero and off we went again. 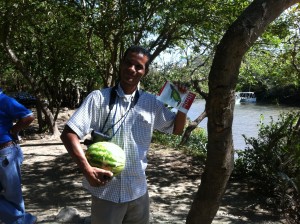 Once at the mouth of the Rio Canas (river) in the national park, we boarded a open air but covered “tour boat” (see main photo) and headed down the muddy waterway lined with trees and lots of different types of vegetation. As promised, the first animal spotted was a group of Howler monkeys (the loudest animal whose call can be heard up to 2 miles away) in the tree tops. Our boat driver, Louis, pulled right up to the edge and the monkeys were directly above our head. Harold did a great impersonation of the Howler monkey call, which is a deep groaning, down-the-drain-sucking sound (how’s that for a description!) to get the monkeys awake. They were just hanging in the limbs taking a nap (it was around 10:30 am). Harold explained that they are active around 5:30 am eating plants/fruits and then they nap for several hours from about 10am to 3pm. He also said that many of the plants are “toxic” which is why they sleep for a number of hours after eating them. So I said, ‘you mean the monkeys are high all the time”? to which he giggled and said “yeah”.

Next we saw a beautiful male Iguana with orange coloring sunning himself in a tree. We pulled up under the tree to get a great shot of this magnificent, timeless creature (look for his photo in the March issue!).

Onward we went and found more monkeys, blue heron, egret and other birds. We were also promised a crocodile experience in which we would feed chicken pieces to the “croc” by pole or throwing out the meat. Sure enough we found the croc and he swam to about 20 yards of the boat and stopped. Louis threw out the meat and he just sat there. I was expecting him to open his big mouth and devour the chicken but this guy was not playing the game. While we were sitting alongside the bank, a white faced monkey came down to our boat. Harold got out his big knife and whacked open the watermelon while the monkey watched and just as I was ready to feed him, he wondered off. Harold surmised he really wanted a banana and was put off by the fact we only had watermelon. Spoiled little monkey:)

For photos of the monkeys and other creatures, be sure to pick up the March issue of PetTalk! I took these in higher resolution and don’t have the opportunity to downsize them for the internet.

Like I said, I could write all day but that’s the major wildlife we say in a 1.5 hour boat ride. We hopped back in the car and along the way stopped to view a 200 year old tree that housed little black bats (see pic although it’s too dark) 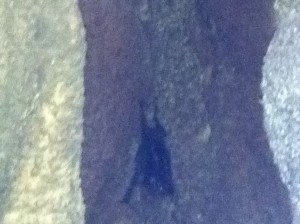 and we also got a photo together…me and my encylopedia, Harold! 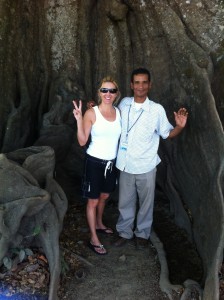 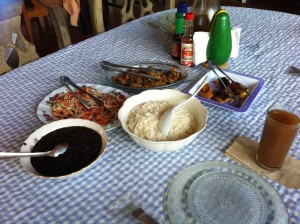 More “menana” on the final day! We ended this day with another beautiful ocean sunset….love this place!