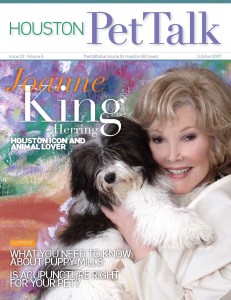 Sometimes I sit back and realize what incredible “pet champions” we have in this city. Because of Houston PetTalk, I’m so used to being around benevolent, caring animal supporters almost daily that I find myself taking for granted the fact that our city has such wonerful pet-loving people. So every once in a while, I stop to remind myself that these folks are extraordinary; a blessing; a necessary part of making our city more humane than it otherwise would be.

The list of people that give to animal charities in this city is immense. Some give time, some give money, some lend their talents, some lend their “celebrity” and so on but they all give love and hope for the future to animals that need our care and stewardship.

As an example, I’ve had the pleasure of creating a friendship with Joanne King Herring.She has such a big spot in her heart for animals and she will do anything asked of her to help their cause…appear on SNAP’s Calendar Cover, donate to rescue groups, appear at events to sign books and she even created an award to be given each year at the Houston Humane Society Gala for someone that adopts a pet that is “least likely to be adopted” from their shelter. At the gala in November of 2008, the award was presented to Posey Parker who adopted a large mixed breed, male dog in need of some “etiquette schooling”. Posey has taken on the challenge of bringing this dog into her life and working everything out. Dr. Mark Silberman of Southwest Animal Clinic donated a $1000 worth of veterinary services to help Posey and her new mate start out on the right path to health and happiness.

I was reminded of Joanne’s generosity as I was watching television and Charlie Wilson’s War, the movie that thrust Joanne back in the spotlight once again, was playing. I began thinking of her good deeds and then all of the good deeds that our citizens perform everyday in Houston.

So thank you to every person that spends their time or money making Houston a better place to live for both people and pets.

Bring your 4-leggers, bring the 2-leggers and…