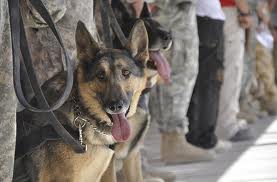 The Boneyard and All Natural Pet Delivery will host a fundraiser in honor on the inaugural K-9 Veterans Day on Saturday March 10, 2012 from 6pm to 9pm. The goal is to raise money for the US Military K-9 Fund, established to support our military working dogs deployed with our troops to the Middle East and other overseas locations.

The actual date for the first K-9 Veterans Day will be March 13th. It has been set up in remembrance of all the working dogs who have risked their lives at the sides of soldiers beginning in World War II, right up through the present day. In fact, there are now more K-9 soldiers than ever before.

MWD Fama H176 is one of the newest K-9 veterans. She is a newly retired military working

dog. She will be on hand at The Boneyard on March 10th to celebrate her new holiday.

Association Inc in Burlington, NJ. The Texas group is a stand-alone chapter. They get no funding

from the national association headquartered in NJ, and have no legal ties with them. The work

they do for the military working dogs is their own project.

A spokesperson said, “Our goal is to provide every dog deployed with our military extra

equipment and supplies to allow them to do their jobs better.”

The Texas Chapter sends care packages to military working dogs where they serve. The packages

include boots, cooling vests and mats, all of which aid them in staying cool in the hot climates

where a great number of them are deployed. Also included are Doggles™ which are special

goggles for dogs. These goggles provide them protection from the sun and sand.

Cooling equipment is extremely helpful to dogs in hot, dry areas. The dogs need help in

regulating their body temperature. They can experience heat exhaustion faster than a human.

Besides the danger to their health and lives, heat can inhibit their sense of smell, prohibiting

them from sniffing out caches of buried or hidden weapons and ammunition.

into service. The only equipment they get when they graduate from training school at Lackland

AFB in San Antonio is a simple tracking harness. They themselves are considered equipment of

K-9 Veterans Day has been a long time coming. Now that it is being recognized, it only seems

fitting to use the day to benefit current military working dogs. The Boneyard and All Natural Pet

Delivery intend to do just that. The US Military K-9 Fund Inc will put the donated funds to good

use helping military working dogs around the world.

About US Military K-9 Fund Inc:

Founder Bobbie Miller, a postal worker at an ACE Hardware Store had been processing APO

boxes going to Iraq and Afghanistan for over 9 years. When she saw a package going to a K-9

Unit in 2010, she decided to ask if it contained anything for the dogs, and the customer replied

that she did not think there was. Bobbie asked to send the dogs some toys and treats, and was

given the go-ahead. From that small beginning, the US Military K-9 Fund Inc grew and has sent

more than 250 boxes to places as far as South Korea, Japan, Iraq and Afghanistan.

Ann Morrison is the Administrator of the Fund. Ann is an Air Force Veteran, retired from a

with fund-raising for the US Military K-9 Fund.

The Fund has been supported by individual contributors, companies that have offered reduced

pricing and donations, and grant money from a local foundation. The US Military K-9 Fund Inc

For the dog days of summer, what…