Posted on May 3, 2011 By Michelle Mantor DOGS, HUMAN INTEREST 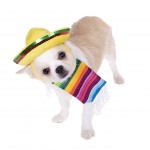 From safeguarding Mexican homes from evil spirits to easing asthma and arthritis, in honor of Cinco de Mayo, the American Kennel Club® (AKC) celebrates the loveable breeds of Mexican descent.  While you won’t find either the Chihuahua or Xoloitzcuintli doing the Mexican hat dance on Cinco de Mayo, both breeds are sure to be wagging their tails to show delight in their country of origin’s heritage and pride.

“The rich and lively culture of Mexico extends beyond Cinco de Mayo and is seen in the joy that both the Chihuahua and Xoloitzcuintli bring to their owners on a daily basis,” said AKC spokesperson Gina DiNardo. “These Mexican breeds both share unique and diverse histories in their native country and today make loveable companions all over the world.”

A member of the Toy Group, the Chihuahua is the 13th most popular breed in the United States, according to 2010 AKC registration statistics.  The breed derives its name from the Mexican State of Chihuahua, where the earliest specimens of the breed were found.  Much folklore surrounds the Chihuahua breed.  The ancient Aztec culture of Central America may have used the dogs for religious sacrifice, burying them with their dead masters so the person’s sins could be transferred to the dog.  Some people believe the Chihuahua’s small warm body can be used to relieve stomach upset and arthritis, or to discourage asthma attacks.  True or not, these stories show the Chihuahua has long been man’s best friend.

AS A BONUS, HOUSTON HUMANE SOCIETY IF HAVING A CHIHUAHUA SPECIAL!

Despurrate Housecats are not to be forgotten!  Things are heating up on Whiskerteria Lane, and every cat is feeling a bit crowded. For the entire month of May all felines will have a special 2 for 1 adoption fee of $50 .

As a family pet, Chihuahuas are known for their longevity, most living between 15-to-20-years.  They may not be the best choice for families with small children, as they are very delicate as puppies and can be inadvertently injured by being dropped.  This sassy charmer likes to bark and scamper around, but is mainly an indoor dog, not able to tolerate cold weather.  Chihuahuas are smart and high-spirited and need house-training and socialization. They come in a variety of colors – solid, marked or splashed – and their coat may be long or short. Smooth coated Chihuahuas need very little grooming, while long coats need occasional brushing, but still require minimal grooming.

The American Kennel Club’s 170th Breed, the Xoloitzcuintli (pronounced show-low-etz-queent-lee), often called the Xolo, is one of the world’s oldest and rarest breeds and can justly be called the first dog of the Americas. In ancient times it was believed that Xolos safeguarded the home from evil spirits and intruders. Today the breed is still considered a “healer” in remote Mexican villages used to ward off and cure ailments like rheumatism, asthma, toothaches and insomnia.

The Xolo comes in three sizes: toy, miniature and standard; and two hair-types: hairless and coated. The hairless has skin that is smooth, tough and protective.  The coated variety is covered by a short, flat coat. They range in color from black, grey black and slate grey to red, liver and bronze.  They serve as an excellent companion for families due to their attentive and calm and at times aloof nature and require moderate exercise and grooming.

Visit www.akc.org for more information on the Chihuahua or Xoloitzcuintli or meet them in person at Meet the Breeds at the Javits Center in New York City on November 19th and 20th or at the AKC/Eukanuba National Championship December 17th and 18th in Orlando, Florida.

As part of their Grand Opening celebration…

Skip the card, Say it in the…