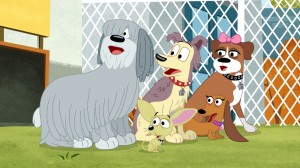 With summer in full swing, The Hub television network, a destination for kids and their families, will present a special “Dog Days of Summer” programming event August 8-14 featuring a week of dog-themed movies, culminating in the return of all-new episodes of one of the network’s most popular series, the animated “Pound Puppies.”

The Hub Original Series “Pound Puppies” features a team of fearless dogs whose mission is to find homes for puppies in need.  Their motto is “A pup for every person and a person for every pup.” The Pound Puppies appear to be “average dogs” keeping the humans who are running Shelter 17 in the dark while helping “dog-kind” find loving families. Once you’re a Pound Puppy, you’re always a Pound Puppy.

One Response to Pound Puppies Returns To HUB Network