Posted on April 13, 2011 By Michelle Mantor HUMAN INTEREST, OTHER PETS, OUR COMMUNITY 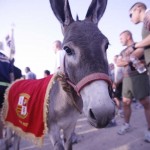 SPCA International Launches Petition Bid to Allow ‘Smoke’ the Donkey
Passage Out of Iraq via Turkey to U.S.

New York City, April 13, 2011 – In an effort to help convince the Turkish Minister of Agriculture and Rural Affairs that it is more than safe to allow ‘Smoke’ passage out of Iraq through Turkey to arrive in New York City, SPCA International is calling on donors and supporters to petition the Turkish authorities in order to bring Smoke to the U.S.  The Iraqi Donkey was rescued in 2008 by Ret. USMC Col John Folsom and his Marines at Camp Taqaddum, brought back to good health and soon became the unit’s mascot and friend.

Today, Folsom is seeking to bring Smoke to Nebraska where the donkey will live and help Wounded Warriors Family Support as a rehabilitation therapy animal.  SPCA International’s experts worked extensively with authorities in Iraq to secure the proper health care documentation for Smoke and arrange for his move to the U.S.  In order for the transport to advance, Smoke and the SPCA International’s rescue experts need passage through Turkey – where the Minister of Agriculture is blocking the trip over concerns that Smoke could pass a disease to animals in Turkey.

“Any concerns over Smoke’s health and condition are unwarranted,” says Terri Crisp of the SPCA International.  “We have worked closely with the USDA and multiple veterinarians in Iraq to ensure Smoke has all the proper immunizations, has cleared the proper tests, and is healthy and safe for travel all the way into the United States.  We have come this far and urge the Turkish Minister of Agriculture to listen to reason so that Smoke can be reunited with his Marine friends and serve an important therapy role helping veterans and their families.”

Ret. Col. John Folsom is providing a safe and loving home for Smoke in Nebraska.  Folsom says he has not stopped thinking about his friend since he left Iraq and is looking forward to giving him the kind of life and home he deserves.

For daily updates on Smoke’s progress and to sign a petition demanding Smoke’s passage through Turkey from Iraq, please go to www.spcai.org .

Do you have your costume ready?  What…