Llamas As Pets – What You Need To Know

Posted on May 4, 2009 By Michelle Mantor OTHER PETS, PET OWNERSHIP 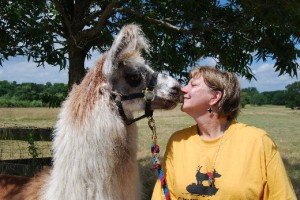 By Kerri Smith
If anyone were to ask me what llama’s were all about it would be two words…peace & serenity. I’m blessed to have these wonderful animals in my life, although I would never have imagined I would actually have llamas as pets (along with my 2 rottweiler’s, 3 horses, 7 cats & miniature donkey, Jeremiah).
Argentine Llamas & Their History
High in the Andes Mountains, llamas have been helping people carry their wares for thousands of years. The llama (pronounced “yama”), is a member of the camel family, and is one of the oldest domesticated animals. Their thick coats of wool and honed survival instincts enable them to thrive in one of the most extreme climates on earth.

The lost Incan city of Machu Pichu is perched on a high saddle, between two jagged mountain peaks, 2,000 ft. above the mighty Urubamba River in Peru. So remote is the location, that the Spanish conquistadors never found it!

The Incan empire, which flourished from about 1200 to 1532 AD; depended on the llama to transport trade goods, root crops, and building materials to extremely difficult to reach locations throughout the South American highlands.

Revered by the Andean people, llamas are much like the bison to the indigenous cultures of North America. The llama is the second most depicted form in Andean art, next to the sun (which was their deity). This “whistling llama pot” is well over a thousand years old. The Quechua people of the Andes call the llama, “Silent Brother”.

Selectively bred for gentleness, for over five thousand years, a well trained llama will eagerly follow adults and children alike. Llamas have enabled us to facilitate wilderness experiences with a wide range of people; from groups of enthusiastic young trailblazers to experienced mountaineers, to self-proclaimed couch potatoes.

Llamas are the perfect low-impact, high altitude pack animal. Their leather padded, two-toed feet and natural agility give them a sure-footedness akin to mountain goats and bighorn sheep. Their tracks and droppings are similar to an elk’s, and have little impact on fragile wilderness trails. They exemplify the “leave no trace” wilderness ethic.

Llamas are great hiking companions. They are alert, curious, and just as excited to be in the mountains as we are. They walk at a comfortable pace for hiking humans; and their keen senses of smell, hearing, and sight will often point out a distant herd of deer or elk for us. They have captured our hearts with their unique, “llama-like” behavior and amusing personalities. Their presence makes our time in the wilderness even more memorable.

“Mountain Mama”, my 17 year old likes to have her way and space. She loves to roll in the pasture and she’s considered the “boss lady”. I also have “Pilgrim”, who is a 2 yr. old male and he’s very cool and fun…loves to just “watch you”. I also lost a very special llama, “Pinker” a couple of years ago. He was the most photographed Llama in the Houston area. Pinker’s photo was on Houston Live Stock Show & Rodeo web-site for years.

It was very difficult when Pinker passed so suddenly. I teach Pet Loss and Grief with Live Oak Pet Services, Pet Crematory in Anderson Texas… but “we all” feel the ache when we lose our best friends. Death is part of life…and I like to look at death as a “celebration of life!”
A Few FAQ’s
1. “Does your llama spit?”  That is the first question I always get.  Not at us, I reassure them.  Spitting is merely the llama’s way to establish dominance and to tell the other llamas “get outa’ my face”!  Many times when they are eating at a common trough, one of them will raise his/her head and spray the other with a mouthful of grain!  Again, reinforcing “it’s mine”.

Just a hint:  Don’t get in the crossfire!

2. Are llamas noisy? Llamas are the most remarkable, intelligent animals.  They are elegant and bring one a sense of serenity.  They make a soothing “hummm ” sound when they are content, and often hum to humans, as well as the other llamas.

3. Can llamas be trained? Llamas can be trained in many areas such as:

.. Follow you on a hiking trail carrying a pack.
.. Serve as a guard animal for goats, sheep, etc.
.. Compete in halter and performance at Llama Shows, – e.g.,  over obstacles, calmly
walking through a simulated public relations course, and
.. dressing up in a costume contest, etc.  (Children and adults participate!)

The Houston Livestock Show and Rodeo features a llama show each year.
One of the favorite events is “Loan a Llama”.  A llama owner loans a trained llama
to a child who has applied to participate.  Many times these are kids that have never seen a live llama, much less lead one.  What an exciting and rewarding activity for all!

Llamas are easy keepers.  The subsist on grazing, hay, llama food,  plus require annual shots and periodic worming.  Here in Texas they are normally partially shorn for the summer months.  This is to keep them cool – plus one can sell the wool.

Once you have owned a llama – you ask yourself:  “Why did I wait so long”?
They are unique and such a pleasure to be around.
My good friends, Jerry & Eileen Bennick of J and E Ranch, Hockley Texas showed me what a special gift of llama ownership is all about. If you have questions about llamas, feel free to email me or Jerry & Eileen at texas2sum@hotmail.com.
Kerri Smith
Founder
Live Oak Pet Services, Pet Crematory
www.liveoakpetservices.com
ksmithliveoak@aol.com 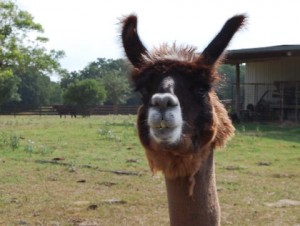 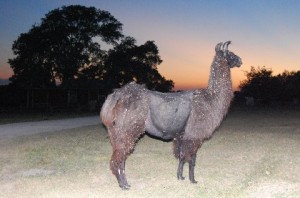 5 Responses to Llamas As Pets – What You Need To Know