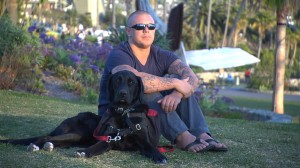 Shelter Me a PBS television special that celebrates the human-animal bond will premiere in Houston on June 19 at 9 a.m.  The one-hour, emotionally charged show is hosted by actress Katherine Heigl and showcases inspirational stories about shelter dogs and the lives they’ve changed. It highlights a women’s prison where inmates train shelter dogs to become service animals; shows two U.S. soldiers who begin recovering from PTSD after being paired with shelter dogs; and follows the journey of two stray dogs from street to shelter to their new family home.

The project was created by filmmaker Steven Latham who wants to engage the public in helping to find solutions for the 3-4 million dogs and cats that are euthanized every year in the United States.  “Shelter Me” is sponsored by Ellen DeGeneres’ pet food company, Halo, Purely for Pets®, and together they are committed to the well-being of shelter pets.

There are 3-4 million dogs and cats euthanized every year in the United States, and as the show’s Producer Steve Latham says, “We need to continue to raise awareness and increase shelter adoptions. I want people to realize that shelter pets are the best pets.”

Visit www.shelterme.com for more info or to preview a trailer of Shelter Me. or like the show on Facebook: https://www.facebook.com/ShelterMeTV

for more info or to preview a trailer of Shelter Me. or like the show on Facebook: https://www.facebook.com/ShelterMeTV

Peace, Love and Dogs i…