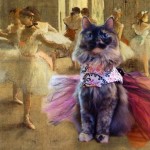 Cleo, the Montrose cat and community activist, is organizing an event to help SMART Rescue (a no-kill animal rescue organization) and Dominic Walsh Dance Theater, Saturday May 21 at Mixed Emotions Fine Art called Cleo’s Trio: Art, Music, and Dance. The fundraiser will include performances by Two Star Symphony, Dominic Walsh Dance Theater, and Cleo will be there in her tutu.

SMART Rescue takes in animals that many others would refuse or kill. They save animals from kill shelters (like Harris County Animal Control where Cleo is from) and others that are very ill and/or abused. Since surgery is a necessity, they are in need of cash. They also have a sanctuary for unadoptable animals to live out their lives in the peace and love all animals deserve. They commit to animals for life, which means they take all animals back that have been adopted out and the owner can no longer care for. With the economy in such dire straits, they are getting a lot of surrenders plus it is puppy and kitten season, so there are tons of animals that need homes (especially kittens!).

To help with the kitten/cat crisis, Spec’s Wines, Spirits, and Fine Foods downtown has graciously offered us a spot outside their doors this Saturday (4/30) and next Saturday (5/7) to display some cats/kittens for adoption and sell tickets to Cleo’s Trio for ½ price ($10). Cleo will be there too! We’ll be there from 10-1, 2410 Smith Street.

Enjoy a video of Cleo: http://bit.ly/Cleo3

A Bark in the Park