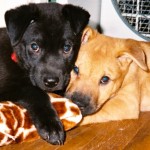 The new documentary “One Hundred Thousand Hearts” is about the pet population crisis in Houston
and the importance of spaying and neutering. Its premiere showing is on Sunday, September 26, 2010
at the downtown Houston Public Library, 4th floor theater. Doors open at 2:00pm, the movie starts
promptly at 2:30pm and ends at 4:28pm. There is no admission fee and parking is free on the street.
This is not a HPL sponsored event.

The documentary is directed by independent filmmaker and native Houstonian Gurukarta Khalsa. “One Hundred Thousand Hearts” is her third documentary. It was filmed during July and August of this year in Houston and features local veterinarians, shelter workers, rescue groups, volunteers and pet lovers, including Deborah Hoffman of Corridor Rescue, Deana Sellens of Spay Houston, Laura Welch of SNAP, Mike Kinsella of Friends of BARC, Shelby Kibodeaux of CAP, Dr. Caroline Oeben, Dr. Dev Rajan, and Dr. Robyn Palmer. Both professionals and laypeople discuss their experiences and the state of affairs “behind the scenes” in our pet population. Khalsa decided to make this documentary after she learned that over 100,000 adoptable pets are killed in local shelters each year. The film includes original music by Cary Beare and Wendy Francisco.

The goal of this documentary is to raise awareness: to educate, enlighten, and encourage people to
understand what is happening to pets in Houston and to learn what they can do to change things for the better. Shot entirely on a Canon digital ELPH using the video function settings, Khalsa hopes to inspire other filmmakers, wherever they live and with whatever equipment they own, to pick up a camera and do the same thing in their communities in order to spread the word about this deeply important topic. Her other films include, “Emma Lois Smith tours Houston” and “The 1st Annual NOLA Veggie Fest,” both of which aired on Houston Media Source’s cable access channels to good reviews. Khalsa plans to release “One Hundred Thousand Hearts” for free online viewing October 2010 at www.gurukarta.com

November Is Adopt A Se…

There is something to be said for…