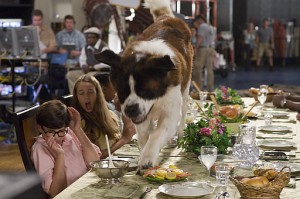 Bring together one mega-popular pooch, an all-star cast, some of today’s hottest music and a barrel of bouncing baby St. Bernards, and it all adds up to Beethoven’s Big Break!  The all-new adventure comes exclusively to DVD on December 26, 2008 from Universal Studios Home Entertainment.

One Response to Beethoven’s Back!