I finally had my Iguana encounter this morning! I was proverbially looking in all the wrong places. I have been focusing on the ground, which is where I was used to seeing iguanas in St. Thomas, or at least in the trees. But this morning I heard a commotion on the roof as I came out the door and when I looked up, I saw an iguana tale hanging out the eaves of the house between the thatch roof and tiles. Ah ha! Now as I looked across several rooftops, I saw 4 iguanas sunning themselves. Of course I didn’t have my camera again. No offense to the iguanas of Costa Rica, but they are not as handsome as their Caribbean counterparts. 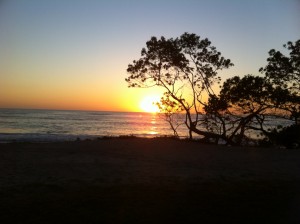 Today was another beautiful mid-eighties, sunny day. We traveled to the beaches of Tamarindo which are really beautiful in a natural, organic way…lots of driftwood, mangroves, rocky shores, sand the color of  Galveston sand. The trip was again an exercise in patience and fear control as we traveled over single lane roads at speeds I was totally uncomfortable with and gravel/dirt roads that passed through small low income areas and rural areas. What is interesting about Costa Rica is that you have every aspect of terrain that you could want to see in such a small area…mountains, volcanoes, rain forests, rocky beaches, sandy beaches, flatlands/patures and more. I have only been in a very small area on the Pacific coast and have seen all of this except volcanoes that are in the more eastern areas.

I learned that the Howler Monkey I was looking forward to meeting (but not shaking their hand!), lives in the interior of the country during this time of year because they need the food/fruits provided in these areas and they come near the coast during the rainy season.

We stayed at the beach long enough to watch the beautiful sunset, a natural pleasure that Tamarindo is known for, much like our KEY WEST sunsets. People gathered around as we watched the sun melt into the Pacific (see photo) and toasted each other for another beautiful day in paradise.

As you can see, I survived the zip lining adventure, which was totally exhilarating and highly recommended.

Because of the wildfires and drought conditions,…