Jeff Corwin “On The Cover” With Houston PetTalk 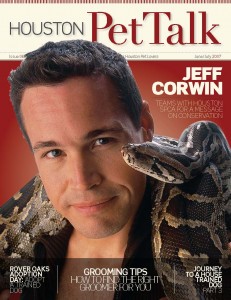 “Rewind With Houston PetTalk” is a look back in time at some memorable articles we have published in our print magazine. Perhaps you missed the article and we would like to share it with you; or, you may have read it but would welcome a fresh look at the subject. Either way, enjoy!

Most of us have encountered impressive people at one time or another. Someone who makes a lasting impression. On rare occasions, the encounter is exalted to a higher level where you continue to think about the experience. Perhaps the person has conveyed a message you are pondering or has changed your mindset in some way.

Jeff Corwin made a special journey to Houston to share his thoughts on conservation at the annual Animal Talk Luncheon sponsored by the Houston SPCA. “It’s a real treasure to have someone as dedicated to animals as Jeff Corwin lend his time to our organization” says Patricia Mercer, President of the Houston SPCA. The ballroom at the Intercontinental Hotel was filled to capacity with Corwin fans and Houston SPCA supporters that were delighted by his honest, reverent and meaningful words.

Jeff’s background in science, including a Bachelor of Science degree in Biology and a Master of Science degree in Wildlife and Fisheries Conservation, coupled with living in Belize, prepared him for a role educating the public on habitat conservation and how our ecosystem’s dependencies are often reliant on humans to respect their inherent needs. Yes, there will be extinction of species based on natural selection but the message to humans is simple….don’t be the causal nexus.

What I found striking about Jeff’s message is actually that the message is pure. Coming from a man who has found celebrity, been named one of People Magazine’s “50 Most Beautiful People”, made numerous television appearances including Good Morning America, CBS Morning Show, Tonight Show with Jay Leno, Oprah and won an Emmy for best performer in a children’s series, he’s unaffected by the media attention. He simply has a true love and respect for all of God’s creatures and he’s doing everything he can to communicate his convictions.

In our busy lives it’s easy to forget that each of us can make an impact on keeping our planet healthy and intact. After reflecting upon Jeff’s message over a period of days, I discovered there were three important elements to his speech that kept me engaged and affected enough to work harder at making my own footprint on conservation.First, we can educate others about the value of animals to our environment.

Extinction of a species has a price for everyone to pay. Teach a child, volunteer at a wildlife sanctuary, donate to the charity of your choice, etc. The smallest gesture has a lasting impact.S econd, every creature, from a cuddly Koala bear to a horned lizard, shares more in common with us than we might think. We have the same basic needs to reproduce, eat, protect our territory, protect our young and survive. As Jeff noted in his speech, “we’re really all on this planet together just trying to make our own way”.

The third element is the catalyst that brought Jeff to Houston. Even with the destruction of some habitats, global environmental effects, poaching, illegal animal trade and cruelty to animals, Jeff focuses on a message of hope. When looking around the room full of people that work for or support the Houston SPCA, his faith is boosted knowing there are many people who are working hard to counteract the forces that endanger animals and their habitats. He chose to support this local organization by bringing his message of encouragement and showing his appreciation for their efforts.

Houston has many hard working humane charity organizations but the Houston SPCA is unique in several ways.It is the only facility in the Bayou City equipped to take in and provide humane, temporary shelter to big exotic cats like lions and tigers and other exotic animals like bears and primates. Of the 100,000 animals cared for each year at the shelter, many are farm animals, native wildlife or small mammals such as guinea pigs and rabbits.I

n 2006, the Houston SPCA was awarded the Shelter of the Year award during Purina Pro Plan’s 52nd Annual Show Dogs of the Year Awards, presented by Dogs in Review, Bow Tie, Inc. The award was primarily given for the Houston SPCA’s disaster relief response to Hurricane Katrina and Rita where they sheltered 1500 and 1200 animals respectively.

Another unique factor about the Houston SPCA is the presence of a university-trained animal behavior specialist on staff. The specialist works with shelter staff to evaluate the temperaments of all incoming animals and low cost dog training classes are offered to the public. Additional services at the shelter include spay/neuter, cruelty investigations, adoptions, pet facilitated therapy for nursing homes and hospitals, a pet loss support group, foster care, children’s education programs and a PetSafe program which provides free temporary boarding, vaccinations and spay/neuter to pets of families fleeing domestic violence.

It’s unfortunate in today’s society that we see an overwhelming need for services to counteract pet overpopulation and cruelty, but sadly it exists. For organizations such as the Houston SPCA to provide a variety of services requires funding. The generosity of Houstonians makes their efforts possible. One of the primary fundraising events is the upcoming 13th Annual Houston SPCA Pet Telethon, August 25th from 3pm to 8pm on WB39. The telethon and local celebrities highlight adoptable animals and the broadcast will include segments on Animal Planet’s Animal Cops: Houston television show and will highlight stories where animals have been given a second chance.

Another important element to the success of the Houston SPCA is the foster care program. This program allows the shelter to reach out and help or save additional animals through volunteers who take care of the animals in their own homes. Heidi Brasher, Director of Community Outreach notes, “We are making a great effort to increase our foster care program. We have two programs, one for healthy adoptables and one for animals that are ill or too young”. She also adds, “Additional volunteers are needed for the program to help save more lives than ever before”.

The Houston SPCA opened its doors 83 years ago with a mission “to promote commitment to and respect for all animals and to free them from suffering, abuse, and exploitation”. They have come to the rescue of thousands of animals and dedicate their time to strengthening the human-animal bond and increasing awareness of the value of all animals.

The daunting task of helping stray and abused animals is not to be taken lightly. It’s not only a tragedy but it’s a public health issue. Many of the challenges facing our local humane organizations have legal implications ranging from strengthening laws to actively prosecuting cruelty cases. For more information on legal issues currently at stake and for information on how to help, visit the Houston SPCA’s web site at www.hspca.org.

One major factor where the public could make a huge impact to alleviate strain on the Houston SPCA and their sister charities in Houston is simply giving careful thought prior to adding a pet to the family and then once the commitment is made, keep the pet. Owner surrender makes up more than half of all pets in shelters.

So as one local organization works to make a difference for animals in our city, it is juxtaposed to Jeff Corwin’s global quest to educate people on the importance of all animals in our ecosystem. Although the geographic focus of their mission may be different, both the Houston SPCA and Jeff Corwin are making progress by changing the mindset of people toward animal value, even if it takes one person at a time. And each time they succeed, I can’t help but think of Neil Armstrong’s famous words, “That’s one small step for man, one giant leap for mankind”.

I recently had one of those encounters with lover of all things wild, Jeff Corwin. We all know Jeff as the host of Animal Planet’s Corwin’s Quest and The Jeff Corwin Experience where he scours the planet on a quest to share the ecosystem with TV viewers in a cleverly entertaining way. Whether he’s slithering along on his belly in the rain forest trying to catch a glimpse of a poison-arrow frog or going deep into the Costa Rican rainforest to track down the lengthy but elusive Fer-de-lance Viper, his knowledge, laced with humorous delivery, captivates and educates his audience.

The Houston SPCA is having a feline…

A horse in south Houston fell 20…

Bunnypalooza Sequel: The Year of the Rabbit…

2 Responses to Jeff Corwin “On The Cover” With Houston PetTalk