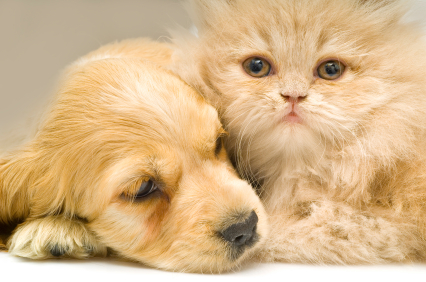 The American Pet Products Association (APPA) just released the 2009-2010 National Pet Owners Survey, the most comprehensive consumer research providing insight on demographics, buying habits, and other traits of U.S. owners of dogs, cats, fish, birds, equine, reptiles, and small animals. Here are some of the results:

Amount Spent on Pets in the Past 12 Months

Caring for a Pet’s Health

Dog visits to the veterinarian are up (2.8 visits), representing a+8% gain in the number of visits from 2006, while cat visits remained unchanged (2.1 visits) and the number of times a bird was taken to the veterinarian declined by -33% to two visits from three visits in 2006.  Thirteen percent of dogs and 21% of cats are considered obese/overweight by their veterinarian.  It is also interesting to note that when asked to indicate their priority if there was a choice between a large medical expense for themselves or their pet, 15% of dog owners would attend to their dog’s need before their own, and 13% of cat owners would do the same.

Provisions for Pet in Owner’s Will

Pet owners still prefer family or friends to care for their animals while they are on vacation. However, The Survey shows that more pets than ever are on the move with 21% of dog owners taking their pet with them in the car when they travel.  These owners take their dog on an average of five car trips per year. Cat owners bring their feline friend on three car trips per year.  New to the 2009-2010 APPA Survey is the fact that among the 3% of owners who take their dog to work, they have done so an average of 17 times over the past 12 months.

Gift giving to pets continues to rise in popularity. The Survey shows more than one-half of all dog, cat, bird, and small animal owners report having purchased a gift for their pets in the past 12 months, with most buying a gift for their pet for no special occasion.  Fish and reptile owners buy the least number of gifts for their pet in a year (three gifts).  However, even though fewer fish owners buy gifts and buy fewer of them, they spend more money per gift ($37) than other pet owners.

The Survey also profiles who the pet owners are and where they live in the U.S.  There are more equine owners in the Central region than owners of other pets or the remaining population. Pet owners have a significantly higher proportion of households that include children under 18 (averaging 38%), while only 19% of non-pet owning households include young children.  Also bird and cat owners include more single female owners than other pet owners.

The average age of the primary shopper for pet products is 47 years old and that person is typically female.

In addition to the information provided in The Survey , APPA has noted additional trends in the pet marketplace that may affect pet ownership growth including: continued and unprecedented growth in the number and types of products available for pets; the crossover of some products from the human side to the pet side; the proliferation of designer pet products ranging from food dishes to carriers to shampoos; vastly improved medicines for pets, particularly in the area of flea and tick control; more owners medicating and treating pets themselves in addition to the veterinarian; pet friendly hotels or upscale boarding facilities that make it convenient for the owner to travel; specialized food niches for older pets as well as kittens/puppies; food for health related issues and diet; and water specifically designed for pets.