Posted on November 6, 2018 By Gabby Garcia HEADLINE, OTHER PETS 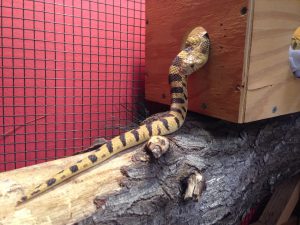 Did you know that JJ Watt lives with us at our wildlife center on Hammerly Boulevard in Houston? Now you didn’t think I was actually talking about the football player for the Texans, did you? JJ is our bullsnake. We named him JJ Watt because when we got him, he was exactly the same height at JJ, the football player. Our JJ has continued to grow so now he would be a bit taller than the human JJ Watt.

JJ, the bullsnake, is one of our Animal Ambassadors and is a man about town. He goes to community events, schools and was recently on TV. He’s a real star! We use him to educate the public about snakes. Usually, the first reaction we get from people is fear and there’s a big misconception about how snakes feel. No, they are not slimy. By the time we finish talking to people about JJ and how valuable he is to the environment, they feel better about snakes.

Bullsnakes are fairly common throughout the United States and are probably best known for their ability to mimic the dreaded rattlesnake. This ability to mimic a rattler is used when the bullsnake feels threatened. They can mimic the rattler’s behavior, the markings are very similar, and they are about the same size. When threatened, a rattlesnake will shake its tail before it strikes. You will actually hear the tail rattle. You may hear a similar sound from a bullsnake. It’s either making the sound with its mouth, vibrating its tail or moving leaves around with its tail, or you may hear nothing at all. The rattlesnake raises its tail when threatened but the bullsnake keeps its tail low to the ground. Bullsnakes have narrow heads and rattlesnakes have triangular heads that are wider than their body.

The diet of a bullsnake is comprised mainly of rodents but they also eat small rabbits, gophers, frogs, lizards and birds. It will use its mouth to grab its prey and will slowly constrict it. The prey dies due to lack of oxygen and the snake eats it whole.

If you’d like us to bring JJ Watt and our other Animal Ambassadors to your school, company or event, contact Victoria at education@twrcwildlifecenter.orgfor pricing. You’ll get to meet Iris, the screech owl and Beatrix, the opossum along with our box turtles. It’s fun and educational, too. 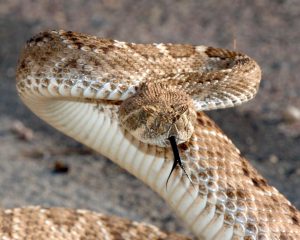